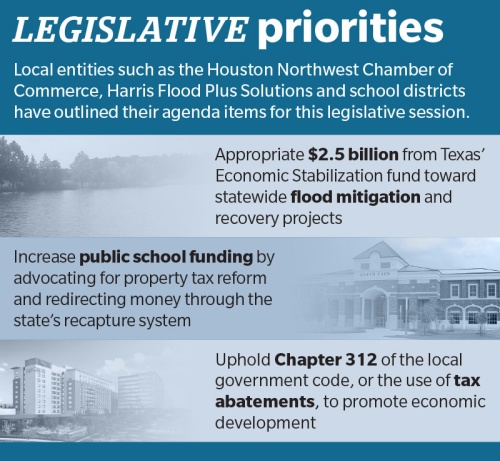 Since the 86th Texas Legislature first convened Jan. 8, local business leaders and school districts are planning trips to Austin to advocate for issues that will affect Spring and Klein residents, from preventing future floods to defending economic development incentives.

Some local entities, including the Houston Northwest Chamber of Commerce, are in support of a bill that would appropriate $2.5 billion from Texas’ Economic Stabilization Fund, or the Rainy Day Fund, for statewide flood prevention projects as well as recovery projects in Harris County and other counties affected by Hurricane Harvey in August 2017.

“Things could be rebuilt, projects could move forward a little faster and matching funds would be available,” HNWCC President Barbara Thomason said.

Other legislative priorities from the chamber include protecting economic tools in unincorporated Harris County and increasing the responsiveness and transparency of local municipal utility districts. Meanwhile, officials with Spring and Klein ISDs are advocating for more money for public schools, while local elected officials said their priorities include property tax reform and flood protection.

“Rising property tax bills are a serious concern,” Harris County Precinct 4 Commissioner Jack Cagle said. “By the same token, ... conversations [with residents] have impressed upon me just how badly our neighbors need the flood control, law enforcement and health care services the county provides through those property taxes.”

Harris Flood Plus Solutions, with support of the Houston Northwest Chamber, is meeting with key legislators throughout the legislative session to draft the language for the $2.5 billion flood prevention funding bill and identify potential bill sponsors, said Al Haines, chairman of the chamber’s flood control task force.

The bill, which as of mid-January had not yet been drafted, would allocate $850 million for projects related to Hurricane Harvey recovery across 55 counties, including Harris County, Haines said. It would also allocate up to $600 million to repair aging dam structures and reservoirs statewide and $1.1 billion for statewide flood prevention projects.

Only Texas political subdivisions such as cities, counties and flood control districts that have adopted and are enforcing current flood plain regulations could receive funding, Haines said.

“The legislation itself will not be … earmarked for a specific project or even a specific entity,” Haines said. “It will be earmarked to the ability of these governments to apply for funding.”

Alongside introducing new legislation, Haines said the coalition will continue to advocate for the initiation and completion of Harris County Flood Control District flood bond projects throughout Harris County, including projects along Cypress Creek. As of early January, projects underway in Spring and Klein set to receive bond funding include $54.8 million for repairs to improve stormwater flow and $100 million for flood plain right of way acquisition along Cypress Creek.

Harless said he is drafting bills related to flood prevention, although the details had not yet been finalized as of mid-January. State Sen. Paul Bettencourt, R-Houston, told Community Impact Newspaper in December he supports construction of a third reservoir in the West Houston area, which would increase the capacity of the Addicks and Barker reservoir system.

A third reservoir has been proposed by a number of elected officials, but design and construction would largely fall under the Army Corps of Engineers, said Karen Hastings, project communications manager of the HCFCD.

The HNWCC is also supporting bills and policies that are at risk of being cut that could affect unincorporated areas such as Spring and Klein, including the use of tax abatements, tax increment financing and reinvestment zones, Thomason said. The chamber is planning an advocacy trip to Austin on Feb. 25-26 to lobby for items such as these on its legislative agenda.

“Every legislative session, some legislator gets up there and wants to save state money by eliminating all these programs that they think are icing on the cake,” she said. “So [we are] defending these programs that we need in order to maintain a very basic level of economic health.”

Thomason said the chamber supports reauthorizing Chapter 312 of the Local Government Code—the Property Redevelopment and Tax Abatement Act—which is set to expire in September. On Jan. 16, Senate Bill 118 was filed to extend the act to 2029, which allows local governments to grant tax abatements to attract businesses. The development of the Springwoods Village master-planned community along I-45 was an example of the county using tax abatements to attract developers, Thomason said.

Also on the chamber’s legislative agenda is increasing transparency within municipal utility districts. The chamber recommends all MUDs in Harris County with a voting citizen population of 250 or more be required to post board elections, agendas and meeting minutes on their websites as well as list board members and contact information.

As Spring and Klein are unincorporated areas, MUDs help provide many of the services a city government would typically provide in an incorporated community, such as providing water and services.

Officials with the Spring Klein Chamber of Commerce are also in support of measures that would increase engagement between the community and MUDS and other political subdivisions.

“There needs to be some serious reform and pressure placed on those groups to be more transparent and to be held more accountable,” Spring Klein Chamber President Brooks Williams said. “Those can really become some rogue organizations if you don’t watch them.”

On Jan. 31, Bettencourt, who was named chair of a newly formed Senate committee on property tax in mid-January by Lt. Gov. Dan Patrick, filed SB 2, the Texas Property Tax Reform and Relief Act. The bill would prevent cities, counties and school districts from collecting more than 2.5 percent more in property tax revenue than they did in the previous year without voter approval on a uniform election date in November.

“We’re going to be looking for property tax relief across the board,” Bettencourt said.

An identical bill had also been filed in the House by Rep. Dustin Burrows,  R-Lubbock, as of Jan. 31.

“The average homeowner in Houston has endured a 37 percent increase on their property tax bill in just four years to nearly $5,000 in total,” Bettencourt said in a statement. “As appraised values go up, tax rates must come down. These increases impact homeowners and business owners across the state, and the time to pass meaningful property tax reform for all Texas is now. ”

KISD Superintendent Bret Champion said at a Jan. 14 board of trustees meeting that if the Legislature does not secure significant additional funding for public schools, the district will have to consider holding another tax ratification election, most likely on a uniform election date in November. Last year, voters rejected Klein ISD’s June 16 tax ratification election, which proposed a 9-cent tax rate increase.

“There’s no guarantee that the Legislature is going to take action that has specific impact in a positive way on Klein ISD. We just don’t know,” Champion said. “To be quite frank, we would love to not have an election.”

In December, the Texas Commission on Public School Finance released a list of recommendations to the Legislature. Among them were increasing public school funding through a variety of options, including Abbott’s plan, providing pathways to a $100,000 teacher salary and expanding career and technical courses to be taught in sixth through eighth grade.

SISD officials said although initiatives such as providing CTE courses in junior high are already partially in place as part of the district’s academic programs and larger strategic compensation plan, they would support legislation that would provide additional funding for existing programs.

“[More CTE funding] would help us to be able to expand these offerings and also be able build the labs, be able to purchase the resources that [we] need,” said Lupita Hinojosa, SISD chief of school leadership and student support services. “If the state were to approve any of these proposals, it would really help the district.”