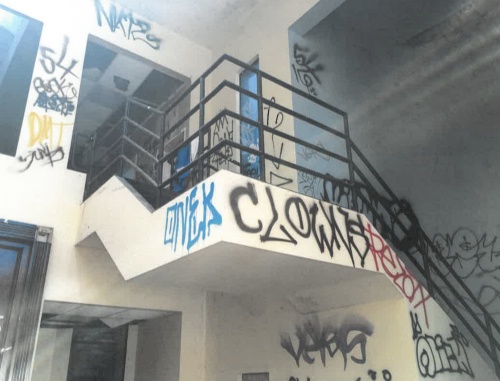 The building at 4702 FM 1960 W., Houston, is in poor condition. On July 10, CESD units surveyed the property and noted several red flags, including spray-painted gang signs and unsecured entrances.

With its graffiti-stained walls and heaping piles of trash, the abandoned building at 4702 FM 1960 W., Houston, has been a public eyesore for the past couple years.

However, recent concerted efforts by the fire marshal’s office, the attorney’s office and other agencies in Harris County has resulted in the owner, who remains undisclosed, to bring the building in compliance by boarding its windows and securing the main entrance.

The building was deemed to be compliant by Harris County Public Health and the case was closed July 27, according to a spokesperson at the department. The case was filed in mid-July due to multiple complaints from the public about break-ins.

The owner secured the building while Harris County Fire Marshal officers were on-site, according to the fire marshal’s public information officer.

“As long as he keeps the property secure, he is in compliance,” the PIO said. “It is our understanding the owner is trying to sell the property.”

Still, the vacant building is a public safety concern, and local police are increasing their patrol to catch and deter criminals on the property.

“Properties in that condition become breeding grounds for crime,” said Jay Coons, District 1 captain with the Harris County Sheriff's Office. “For us, [HCSO and Harris County Precinct 4 Constable’s Office], the focus is to prevent any criminal activity from taking root on the premises.”

The HCSO is conducting at least two security checks of the facility on both evening and night watches, Coons said.

“If we find the perimeter breached, we do a building search,” he said. “We’ve received a criminal trespass affidavit from the owner, and HCSO deputies have been directed to … arrest anyone they find inside the building or on the property.”

A trespass affidavit requests and authorizes local police to enter the specified premises and, in the owner’s absence, enforce all applicable trespass laws on his or her behalf.

The sheriff’s District 1 Patrol and Homeless Outreach Team have been instructed to randomly check the location throughout all three shifts, HSCO Major Jesse Razo said. A Precinct 4 constable is also checking on all three shifts.

Targeted efforts on the nuisance building began July 10 when Champions Emergency Services District units responded to a call at a nearby FedEx store. Several responders noticed red flags at the building, including an unsecured main entrance, evidence of burned material and walls spray-painted with gang signs, according to CESD Fire Chief Dan Shelor.

“The building appears to be a haven for vagrants due to the trash and clothing, which were visible from the entrance,” Shelor wrote in a July 19 letter to a member of the Houston Northwest Chamber of Commerce. “The current condition of this building presents a major safety concern for any emergency response to this address as well as the general public.”

After receiving the letter, the Houston Northwest Chamber then notified Harris County law enforcement and the attorney’s office, according to Shelor.

Efforts to improve the condition of the building have been and will continue to be a community effort.

“Each agency has been a willing partner in attempting to get something done with this eyesore,” Coons said.