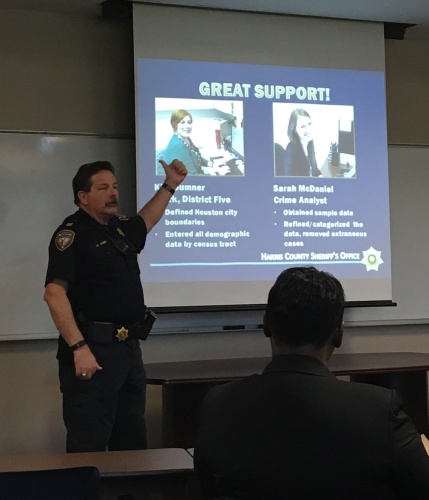 HCSO District 1 Capt. Jay Coons explains the pilot program his office is participating in this year.

The Houston Northwest Chamber of Commerce monthly public safety meeting brought together representatives from the Harris County Sheriff's Office and Harris County Precinct 4 constable's office on March 15 to discuss recent news from the departments and updates on facilities being renovated on Cypresswood Drive.

Precinct 4 Constable Mark Herman said most offices in the county annex at 6831 Cypresswood Drive in Spring, which took on up to 4 feet of water during Hurricane Harvey, are again operational, although the building is not yet open to the public. The Harris County Sheriff's Office portion of the building, located in the back of the facility, is still undergoing repairs.

Herman also updated attendees on the recent arrest of 12 individuals alleged to have conducted more than 150 incidents of tire and wheel thefts in five counties.

"Since the time of those arrests there have been zero tire and wheel thefts," Herman said, referring to the region where the alleged thieves operated.

Precinct 4 has also collaborated with the Federal Bureau of Investigation on several human trafficking cases, resulting in the recent rescue of three girls believed to be victims, he said.

HCSO District 1 Capt. Jay Coons spoke at the meeting about a new pilot program in District 1, designed to decentralize services and command so that investigative units formerly centralized downtown are now under District 1 command.

Coons said District 1 will operate out of three locations, each serving a different part of the 156-square-mile region bounded by I-45, Hwy. 249, the Houston city limits and the boundary of Harris and Montgomery counties. The area is divided into three subdistricts serving the north, central and south parts of that region, he said.

The program also includes greater collaboration with partners such as the Department of Public Safety, from which it has requested six special agents and a sergeant to work with the sheriff's Violent Crimes Unit, Coons said. The sheriff's office is also looking to collaborate more with Precinct 4 and other law enforcement agencies.

Other initiatives include using predictive analytics to determine where to focus resources.

"Not only are we reacting to crime where it’s occurring, hopefully we're going into areas where it might not be occurring today, but that's where we're showing it might occur," Coons said.

Coons will report to the downtown sheriff's office with how resources are used in District 1, he said. In its first week under the pilot program, his office reported three aggravated robbery arrests in collaboration with the HCSO Targeted Enforcement Unit and the Department of Public Safety.

"Sheriff Gonzalez states, 'Our goal is to reduce crime and disorder in District 1 by focusing current resources through a unified command structure,'" Coons said.