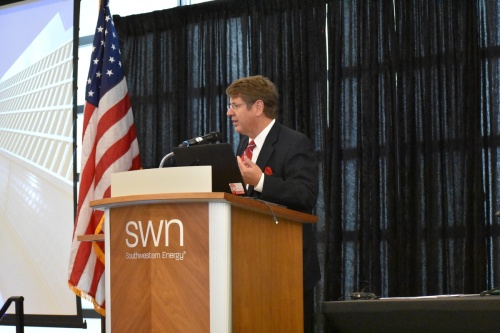 Patrick Jankowski of the Greater Houston Partnership speaks at the Economic Outlook Forum at Southwestern Energy on Friday.

The Houston Northwest Chamber of Commerce’s annual Economic Outlook Forum was held Friday at Southwestern Energy's headquarters in Springwoods Village, featuring speakers from government, business, education and technology sectors discussing what is on horizon for their respective industries.

“We have an optimistic view of the energy business going forward,” he said.

Some of the main points from the forum include:

Harris County Precinct 4 Commissioner Jack Cagle talked about growth in the county and transportation projects that are in progress to help tackle some of the resulting traffic congestion. He said Phase 2 of the $99 million Tomball Tollway project is underway with an anticipated Dec. 31, 2019 completion date. Cagle gave a May 17 expected completion date for the Kuykendahl Road bridge project over Spring Creek—a joint project with Montgomery County—and said he hopes to see work start soon on the Gosling Road bridge over Spring Creek.


2. Texas' rates of uninsured among highest in the nation

Ken Janda, the CEO of health care nonprofit Community Health Choice, discussed the health insurance needs of Texas residents and the Affordable Care Act. Texas has the highest rates of uninsured people in the country, he said.

“For all the faults of the ACA, there are 30 million [American] people now covered who were uninsured,” Janda said.

Janda’s advice to business owners concerned about further changes to health care coverage for their employees was to remain flexible.

“Keep doing what you are doing now, but be ready to flex when laws change,” he said.

Six speakers talked about different ways in which technology is changing the economy. Joshua DeFriece, a physician with Houston Methodist Primary Care Group, discussed the benefits of telemedicine, including a demonstration of the process by which a doctor can diagnose a patient over a video Internet connection. Meanwhile, Van Lindberg, an attorney with the Dykema Cox Smith law firm, discussed the potential of autonomous vehicles to grow the Houston economy, and James Morrison, an agent with the FBI Cyber Task Force, spoke on the ways in which small businesses are vulnerable to cyber attacks.

“Sixty percent of small businesses collapse after they get hit by a cyber attack,” Morrison said.

“We’re definitely on the mend,” Jankowski said. “The worst is behind us in the rearview mirror.”

Two public education speakers focused their remarks on the special challenges faced in the Greater Houston area as the region faces increases in both population growth and property taxes.

“We are one of the most diverse [communities]—perhaps the most—in the country, and we need to work to make sure that is an asset and a strength and something we build on,” said David Thompson, an attorney with Thompson and Horton law firm, which specializes in education. “Schools are going to be central to how we productively respond to changes that are occurring in the world around us, the state and in local level.”
SHARE THIS STORY