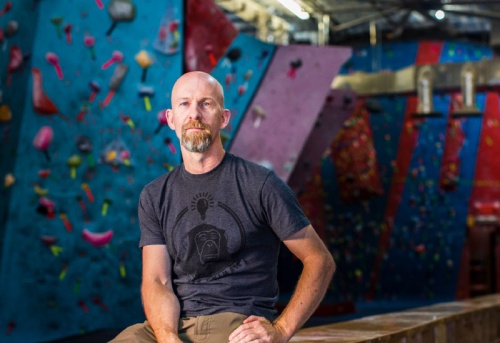 Stone Moves co-owner Cory Melancon said he is passionate about introducing people to the sport and training athletes of all skill levels.

Tucked in a shopping plaza off FM 1960, Spring and Klein residents may drive by Stone Moves, an indoor rock climbing gym, on their everyday commute and never notice it. But the gym is home to nationally recognized athletes as well as beginner and first-time climbers, co-owner Cory Melancon said.

“The focus that’s required to climb is kind of addictive,” said Melancon, who has been an avid climber for more than 20 years. “It’s a good sport.”

Stone Moves offers rope climbing as well as bouldering, which is performed on smaller walls without the uses of ropes or harnesses. The gym is designed for climbers of any skill level and also offers a competitive youth rock climbing team, which regularly competes in regional and national competitions.

The team is open to athletes between the ages of 8-18 and follows a structured, rigorous program, Melancon said.

“I’ll take any kid, but they have to be able to focus,” he said. “We are doing some serious training—it’s not day care. … We actually have a very structured analytics program that we use to track their progress.”

Stone Moves also houses equipment such as a MoonBoard, which is a paneled wall that uses an LED system to light up routes that are controlled by the MoonBoard app, as well as yoga and fitness rooms.

Climbing passes, equipment rentals and monthly memberships are available as well as private lessons for beginners through advanced climbers.

Melancon said he took over ownership of the gym in 2015 after being a dedicated patron for years. He and three other owners—John Muse, Charles Corrigan and Gerald Reichstein—all have additional full-time jobs, as Melancon said the owners are driven by passion, not profit.

“All of the money that we make, we dump back into the facility,” he said. “We’re not in this for the money. We’re in it for the love of the sport. We’re in it to keep the community climbing gym open and to keep the team strong.”