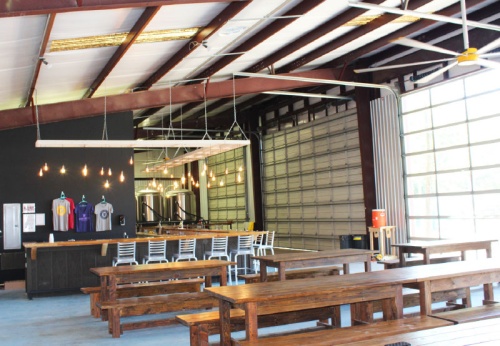 Fortress BeerWorks features indoor and outdoor seating in a dog- and child-friendly environment.

While sitting in his friend’s garage talking and enjoying beers several years ago, John O’Hara said he and his three friends began to mull over an idea: Why not open their own brewery?

The Texas native said he had some experience owning a business—he ran a CrossFit gym for five years—while his friend, Dion Dillard, operated a home brewery based in his garage. O’Hara and his three friends—Dillard, Rob Fleming and Shawn Stasiuk—became serious about the idea in October 2017. On March 21 of this year, they opened Fortress BeerWorks, a spacious brewery on Spring Cypress Road.

“We wanted something in the northwest Houston area, where there wasn’t a lot of representation for breweries,” O’Hara said. “We want to be a little bit of an escape.”

Fortress BeerWorks brews and serves four core beers, or beers that are served year-round: Wit, Nitro Stout, Splash IPA and a blonde ale. In the next couple of months, O’Hara said the owners plan to add a New England IPA and double IPA to their core beer selection. O’Hara said they also plan to serve seasonal beers and will begin selling to other bars and restaurants by summer.

“We wanted to be something for everybody,” O’Hara said.