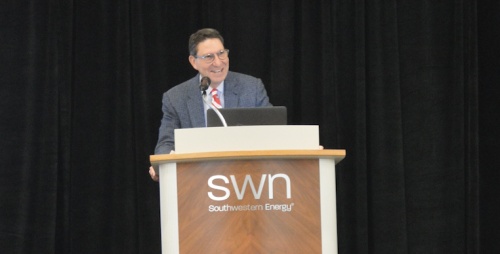 Despite talks of a food retail market run entirely by Amazon, H-E-B President Scott McClelland said brick-and-mortar stores are here to stay. However, McClelland added that grocery stores must adapt to the growing presence of online food delivery services to remain competitive.

Over the past two years, H-E-B has opened two stores in the Spring and Klein area: one on FM 2920 and another on Champion Forest Drive.

“We’re really inundated in the Spring and Cypress and North Houston area,” McClelland said during the Houston Northwest Chamber of Commerce's annual Economic Outlook Forum March 29. “At the same time, if you look at Kroger and Wal-Mart, they’ve pretty much stopped building all together because they’re concerned about Amazon.”

Following Amazon’s purchase of Whole Foods in June 2017, stores such as Fed-Ex and Wal-Mart are experimenting with autonomous delivery vehicles and piloting delivery robots. Meanwhile, consumers—particularly millennials—are opting to eat out more rather than dine in and, more recently, paying extra for food delivery services, McClelland said.

From February 2018 to February 2019, job growth for food and beverage stores in The Woodlands, Houston and Sugar Land area dipped by .3%—a loss of about 700 jobs—according to a February economic report by employment agency Workforce Solutions. The closing of several Randalls grocery stores in the Greater Houston area in 2018 was one driver for this job loss, said Parker Harvey, principal economist of Workforce Solutions’ Gulf Coast Workforce Board.

“Longer term, it’s difficult to say how grocery and clothing retailers will fare,” Harvey said. “Between Amazon Go, a cashierless concept, and the purchase of Whole Foods, the traditional grocery space is likely to remain under pressure.”

To remain competitive, McClelland said H-E-B must work on improving the efficiency and profitability of its online delivery services, which costs the chain supermarket $10 per consumer while the consumer only pays $5. H-E-B’s online delivery services include Curbside, which allows customers to pick up their orders at the store, and Delivery, which delivers orders to customers’ homes.

But emphasis must also be placed on attracting consumers to continue shopping in-store, he said. The H-E-B located at 20311 Champion Forest Drive in Spring for example, opened in April 2017 with the chain’s first sit-down noodle restaurant as well as an in-store optical shop.