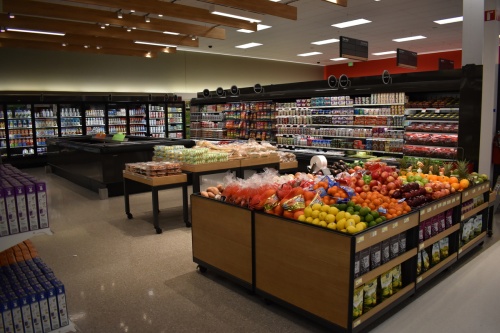 A new Target store opened at the Grand Parkway Marketplace I shopping center on Wednesday.

Show map
Target became the first operational store in the Grand Parkway Marketplace I shopping center today when it opened its doors at 10 a.m. A grand opening for the store will be held Sunday.

The 126,000-square-foot store, located in the shopping center between the Grand Parkway and Spring Stuebner Road at Kuykendahl Road, brings 200 new jobs to the area.

Grand Parkway Marketplace I will include 60 stores and be open by the end of 2017, according to developers Kimco Realty.

"The mannequins we're using, the moveable walls, and how we're merchandising is different from any Target store in the Houston market," Robertson said.

Target public relations specialist Kristy Welker said the store is also a location from which online Target orders are shipped, meaning that residents in the vicinity may receive orders more quickly due to its proximity.

The store also contains a grocery section, a Starbucks coffee shop, a CVS pharmacy and a Target Optical center.

A Grand Parkway Marketplace II shopping center with 35-40 stores is also planned adjacent to the first shopping center. It will be located between Stuebner Airline Road and Kuykendahl Road at the same intersection. An Academy Sports + Outdoors store and a Hobby Lobby were confirmed by Kimco Realty in October 2016.

The Target store is the 36th location for the retailer in the Greater Houston area.
SHARE THIS STORY