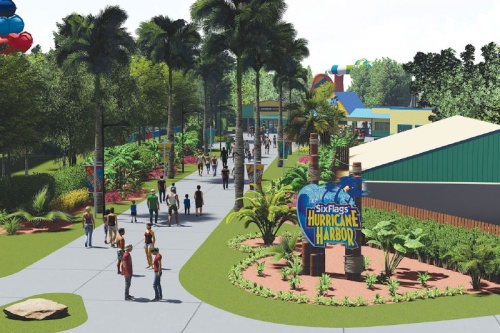 Six Flags Hurricane Harbor SplashTown will open the 2019 season May 4 and will feature a Caribbean-inspired theme and a new six-story slide.

Wet ‘n’ Wild SplashTown, located at 21300 I-45, Spring, will be rebranded as Six Flags Hurricane Harbor SplashTown when the park opens for the 2019 season May 4, the company announced in a Feb. 12 news release. The park will feature a Caribbean-inspired theme and a new six-story slide called the Wahoo Wave.

“We … wanted to completely change what guests thought of the park,” said Jeffrey Siebert, park president of Six Flags Fiesta Texas, adding that the goal is to create a “tropical resort” atmosphere.

However, plans to expand the water park have been put on hold. The park’s previous owners, Premier Parks, announced plans last March to expand the water park by about 30 acres in a multiyear, $20-million effort to add more attractions for the growing population in Northwest Houston. The park occupies 48 acres, but the property includes an additional 30 adjoining acres that have not yet been developed.

Six Flags acquired Wet ‘n’ Wild SplashTown—now Hurricane Harbor—in May 2018, and Siebert said the company is not proceeding with the previous expansion proposal.

Instead, Hurricane Harbor is focusing on adding more attractions and amenities based on guests’ feedback, Siebert said. Premier Parks confirmed with Community Impact Newspaper on Feb. 21 it is no longer involved with the expansion project.

“Those plans were by a completely different company; those were not our plans at all,” Siebert said. “But [when] we became the managing partner of the park, we looked to see what the park’s needs were from an infrastructure standpoint to a guest standpoint.”

The new Wahoo Wave will debut this summer. The ride is six stories tall and includes a 30-foot drop, according to the news release. The park features more than 40 slides and attractions.

Other new features coming this season include a marquee, dining and retail locations—including an employee cafe—as well as ride entrances, Siebert said.

“For example, when you walk through the new entrance … the first thing you’ll see is a new entrance plaza that we’re creating where there’s a giant great white shark that will be hanging,” he said.

Hurricane Harbor will also offer a new membership program as well as Wi-Fi and mobile ordering so guests can order food from their phones while at the park.