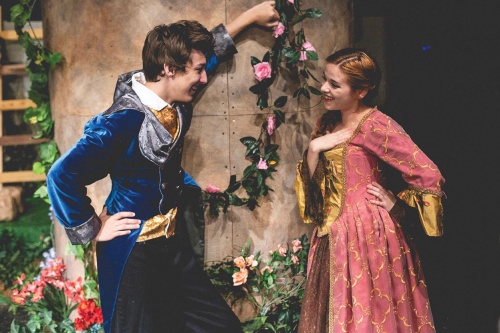 Despite Hurricane Harvey and other setbacks, theater and performing arts groups in Spring and Klein said they remain active and believe the local demand for the arts is on an upward trajectory.

“We took a big hit. We had to cancel four or five shows,” he said. “I think overall sales have been pretty steady in 2018 so far.”

The August storm also flooded The Centrum, a performance space at Cypress Creek Christian Community Center on Cypresswood Drive. The flood displaced nonprofit group Cypress Creek Foundation for the Arts and Community Enrichment, which used the venue for its live performances. The organization’s annual budget dropped from $592,200 in 2017-18 to $531,155 in 2018-19 due to an inability to confirm venues, Cypress Creek FACE Director Nanci Decker said.

Sammy Green, president and director of community theater group Playhouse 1960, said these financial upswings and downturns are part of the performing arts industry.

“There are ups and downs. When times are rough financially for the country, theater tends to sit on the back burner,” Green said. “If you have to cut something out of your budget, going to the theater is going to lose over [patrons] going to the grocery store.”

This year, theater and performing arts groups in Spring and Klein credit their patrons with helping them stay in business—and even prosper—despite these challenges. Local theater groups attribute high income levels and increasing interest in the arts across Harris County with the community’s support for live performances.

“I think the socio-economic quality of the area lends itself to [supporting the arts]. People are able to travel more, go to the theater more,” Green said. “Hand in hand with that goes an appreciation for arts.”

Throughout Spring and Klein, several theater and arts buildings flooded during Harvey but are slated to open in the near future. The Pearl Fincher Museum of Fine Arts on Cypresswood Drive, which flooded last year, is expected to reopen in mid-October, Director of Development Clara Lewis said. The museum will open with the exhibition “An American View Revisited,” which showcases Pearland collector Chip Hosek’s collection of American art.

The Centrum performance space is still undergoing repairs. Renovation efforts have focused on areas used primarily by the Cypress Creek Christian Church, said Norma Lowrey, executive director of the Cypress Creek Christian Community Center, which owns the building. The center is not yet in a position to address renovations of The Centrum, she said.

Decker has already begun to lay the groundwork for the 2019-20 season, and she said she hopes to showcase a wide range of genres to be interesting and appealing to the audiences. The unwavering support of patrons, Decker said, has remained unchanged throughout the years.

“[Performing arts has] been growing, but like any other industry, it’s had its peaks over the years … when times are tougher, we have a harder time selling tickets,” she said. “The one constant has always been the backbone of supporters in the community who want us to stay here.”

Not all theater companies recover from the  industry’s cyclical downturns. In August 2016, the Texas Repertory Theatre closed its doors on Stuebner Airline Road in Spring, citing financial reasons, according to former board members. The professional theater had operated for 11 years, presenting musicals, comedies and dramas.

“Our season ticket sales [in 2016] were about 25 percent of previous years. Some major grants of as much as $20,000 did not materialize,” said Larry Lipton, who was on the theater’s board prior to its closure. “The bottom line is that we ran out of money.”

The theater is initially operating as a touring show performing at a variety of local area venues throughout the summer and fall, which began at The Lanier Stone Chapel on Hargrave Road in July. In the first one-act show, “God’s Megaphone: A Visit with C. S. Lewis,” Fenley portrays the early 20th-century Christian theologian and novelist.

The show sold out on the first weekend, Fenley said.

“We’ve had half a dozen churches inquire about bringing the show to their church,” he said.

The mobile production helps trim costs by limiting rent fees, which was the theater’s largest expense prior to its closure, sitting at $100,000 annually, Fenley said. It also creates a new paradigm where the product is brought to the consumer, he said.

“We can take the show to the audiences, rather than the reverse, so its possible to expose nontraditional theatergoers to the work,” he said.

“There have been years where we wondered whether or not we were going to be able to keep going,” she said. “I think that’s normal in the swing of theaters.”

Ticket prices at Stageworks Theatre have risen due to higher operating costs, such as increasing rent, licensing fees and expenses for stage supplies like makeup, Montgomery said. In its 2015-16 budget, the theater’s total expenses were $655,137. By 2017-18, they grew to $694,077.

However, he said Stageworks has maintained ticket prices in the past two years and even slightly reduced season ticket prices, mainly through more efficient budgeting practices.

This spring, Stageworks Theatre launched a one-year partnership with the Lone Star College System to co-produce 14 performances at the LSC-CyFair Center for the Arts. The collaboration is an opportunity for both entities to expand to new markets and audiences in the area, Montgomery said.

Meanwhile, Montgomery said he believes local viewers are beginning to be more receptive to nontraditional community theater content. When Stageworks opened in 2005, it mainly produced family-friendly performances. But he said the growing open-mindedness of its patrons has enabled the theater to stage productions like “A Few Good Men,” which has mature language, and “Bonnie and Clyde,” which has sexual references.

“[These plays] would not have been performed three or four years ago,” he said, adding there is still backlash.

In the past few years, the number of season ticket holders has declined,  likely due to the controversial content, he said. In response, Stageworks changed its yearly subscription packet to allow viewers to purchase multiple tickets for one show instead of having to attend all eight performances.

For its part, Playhouse 1960 makes strategic decisions on ticket prices based on the community’s ability to spend money, Green said.

Playhouse 1960 primarily finances its productions through big-hit performances, or blockbusters, like “Into the Woods,” “Willy Wonka” and “Grease,” which allow the theater to put on smaller pieces, she said.

The theater seats about 150 people, and blockbuster performances average between 100 and 125 audience members per performance, while smaller plays run from 45 to 50 in attendance, she said.

“I like to have a blend of one or two new works every season where audience members walk away and think about what they’ve seen and how it affects them,” she said.
SHARE THIS STORY