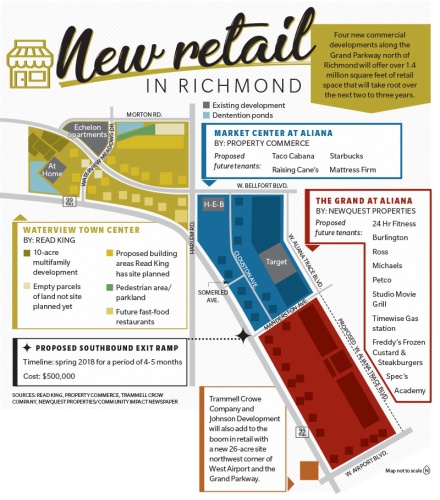 The new retail centers will offer over 1.4 million square feet of retail space.

By the end of 2019 and into early 2020, the entire area along the Grand Parkway, Harlem Road and Grand Mission Boulevard outside of Richmond’s city limits will be transformed due to four major commercial developments that will bring over 1.4 million square feet of retail space to the area.

“I can’t think of anywhere in Houston with more new retail projects or a greater number of square leasing added in that area right now in the city of Houston—that’s a ton of new development,” NewQuest Properties associate Josh Friedlander said.

A fourth development includes Trammell Crowe Company and Johnson Development Corp.’s 26 acre-retail site coming to the northwest corner of West Airport and the Grand Parkway, but nothing more about the development could be announced as of press time.

All three of the main developments are expected to take shape over the next coming years, with estimated completion dates ranging from summer 2018, summer 2019 and early 2020. Property Commerce leasing broker Chad Moss said the decision for Property Commerce to seek out this particular intersection in Richmond was an easy one to make.

“[We decided to build there] because there is a need,” Moss said. “It’s one of the fastest-growing areas in the Houston metropolitan area.”

“The developers all follow the home growth,” Friedlander said. “[and] the home growth is among the best in the United States in that area right now, so the retailer developers know there is a need for retail to follow all these houses.”

The growth in master-planned communities has created a need for retail, restaurants and entertainment in the area, and the coming new developments promise to meet the demand.

NewQuest’s the Grand at Aliana spans 57 acres and will offer an estimated 500,000 square feet of retail space with restaurants, traditional retail and medical tenants. No tenants have officially been announced yet, but Friedlander said NewQuest is in negotiations with several big-box tenants and smaller businesses.
“Construction likely won’t come in until mid-to-late 2018, and the retail likely won’t open until mid-to-late 2019,” Friedlander said.

Directly adjacent to The Grand at Aliana, Property Commerce’s Market Center spans 53 acres and will offer 450,000 square feet of retail space. Target’s first next generation store and a brand-new H-E-B are two major big-box retailers included in the development that have driven interest in the area.

“[This is] the very first Target of its kind anywhere in the United States, and Target decided they wanted to open that right there [in Richmond]—to me, that speaks volumes,” Moss said.

Other tenants in the Market Center include Marshalls and PetSmart—both of which are now open—as well as Hobby Lobby, which is under construction. Raising Cane’s Chicken Fingers, Taco Cabana, Starbucks and Mattress Firm are four more tenants planned for the area that Moss said will open by fall 2018.
Moss said the outside parcels along the Grand Parkway will be finished and open by the end of 2018. More stores located on the interior of the space will be announced in the coming months.

Another major component that has catalyzed retail development in the area is construction along the Grand Parkway.

Stone said what is currently happening with the Grand Parkway happened previously with the Westpark Tollway. Prior to 2004, there were only a handful of communities and no shopping centers along the tollway, according to Stone.

“Just in the last 10-12 years since we opened the Westpark Tollway, that whole area has just exploded in growth,” Stone said. “The same thing is happening along the Grand Parkway ... good access ... [makes it a] very attractive property for the developers.”

“We saw that this area was growing and that this was going to a next major intersection,” Amezquita said. “Whenever you have two really good ingresses and egresses, it makes for a really good retail site.”

Read King’s Waterview Town Center will offer an estimated 500,000 square feet of retail space with a structured community lifestyle feel to the entire development. Two completed tenants include At Home and the newly opened Echelon apartments.

An initial phase for the site includes several fast-food restaurants that will start construction in mid-to-end of 2018 and then open in the first part of 2019. Larger tenants will start construction by early 2019 and then open in late 2019 or 2020, according to Amezquita, but none can be announced as of press time. Read King is also working with another multifamily group to develop a 10-acre parcel for a future multifamily housing development on the site.

Amezquita said centers like the future ones coming to Richmond are starting to market a lifestyle feel that brings city life to the suburbs.

“Another word everybody has been starting to use is called ‘surban’–it’s urban but suburban,” Amezquita said. “We are trying to create an urban feel within a suburb.”

Amezquita said walkable mixed-use developments with sidewalks, landscaping, and signage help create a specific feel to an area that promotes community and attracts the retail customer, a task that has become more challenging for retailers thanks to the increase and accessibility of online shopping.

“You can’t do your hair online–you can’t get your dry cleaning–those are still things that people have to go out and do. So we want to create an environment that–it’s not a hassle to go out,” Amezquita said.

Another new trend includes adding entertainment options, according to Amezquita. The Waterview Town Center will have green areas that encourage people to walk around the center or have a picnic. The Grand at Aliana has a proposed tenant of a Studio Movie Grill.

“It’s a sense of place [where] you don’t have to drive an hour–it’s right in their backyard,” Amezquita said.
The future of this area in Richmond is easy to see, according to Friedlander.
“ It’s going to be a power center,” Friedlander said.

With this in mind, developers agree the retail boom should help mold a new identity for Richmond.
“You are never going to take the charm and class away from old Richmond,” Amezquita said, “but I think there is room for both: You can still have the old charm and that part of historic Richmond as well as the new part of it.”

This story is one update from The January Issue.View the full list of Top 5 stories to follow in 2018 here.