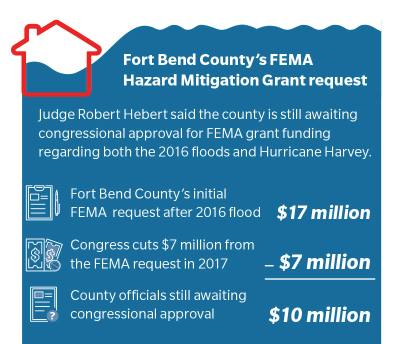 Fort Bend County and the Richmond area experienced extreme devastation after Hurricane Harvey brought torrential rain for a period of three days in late August. Harvey was a unique storm in that it lasted much longer than typical storms, resulting in the overflow of the Brazos River and inundating neighborhoods and communities with intense rainfall.

Community Impact Newspaper reported that while Fort Bend County does not have a buyout program in place, it did apply for $17 million in assistance through the Federal Emergency Management Agency’s Hazard Mitigation Grant after the Memorial Day and Tax Day 2016 floods. Fort Bend County Judge Robert Hebert said the county had legal minds looking at a buyout program for Harvey victims who were not in a floodway.

County officials are still awaiting authorization after Congress cut the county’s $17 million Hazard Mitigation Grant request to a $10 million request, according to Hebert. Aside from the cut, no more federal action has been taken. However, Hebert said the county did receive $9 million in Community Development Block Grant Disaster Recovery program funding that is available for buyouts and elevations regarding properties affected by the 2016 flooding events. The county is in the process of compiling the required applications to submit to the Texas General Land Office before the Feb. 28 deadline. Once those applications are submitted and accepted, then buyouts may start to take place, according to Hebert.

“There is some hope … that the state, in reducing our $17 million [request] to $10 million, may be planning on using the $9 million in CDBGDR funds to make up almost all the difference so that we end up with about $16 or $17 million to spend on buyouts,” Hebert said. “That’s our wishful thinking.”

Hebert said he expects to have finalized buyout information concerning 2016 flooded properties by the middle of this year—before Memorial Day—which would mark two years since the flooding event. Harvey victims hopeful for a buyout are simply at the mercy of the speed of Congress, Hebert said.