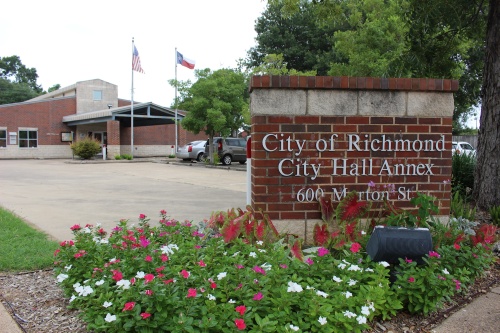 Stephen Wilcox, a project manager for Costello Engineering, presented Richmond city commissioners with short- and long-term solutions to manage drainage and flooding issues in a presentation on the upper Rabbs Bayou Watershed Master Drainage Plan during Monday's meeting at the City Hall Annex. Here are the key takeaways from the meeting:

Costello recommends $5 million in improvements to Rabbs Bayou Watershed
Wilcox presented commissioners with an overview of the upper Rabbs Bayou Watershed Drainage Plan that covers 12 square miles in Richmond from the upper portion of Golfview Drive through downtown. The study identifies land uses and impervious areas within the watershed from 2004 to the present. Wilcox said the land use has not changed much since 2004.

"We identify all those different land uses and types of impervious areas for each drainage area so that way we can quantify when it rains, how much of that water is running off into the creek and causing flooding problems," Wilcox said.

Wilcox said flooding conditions in the area has remained fairly unchanged because development in the area was not constructed with any modern drainage criteria in mind.

Wilcox told commissioners the biggest structural issue within the watershed concerns St. Mark's Episcopal Church along FM 762. Proposed solutions include constructing a floodwall that would encircle the church and be equipped with floodgates, creating a detention pond near the Union Pacific railroad tracks and implementing storm sewer improvements along Austin Street.

"That itself is about $5 million for all those components put together, so it does involve a detention pond on the upstream side, I think that’s the best way to capture that water..." Wilcox said.

No site for the new building has been announced, but Bonnette told commissioners there are several potential sites within the city the building could be located. Bonnette said the new city hall building would have a project cost between $12 million and $14 million.

Commissioners table action to add 72 acres to West Fort Bend Management District
Commissioners decided to table an action to add 72 additional acres to the West Fort Bend Management District. City Attorney Gary Smith explained the additional acreage is part of a pointed system of using a management district to fund a residential development. If approved, the 72 acres would be annexed from the city limits into the management district to provide space for 250 to 350 new single-family residential homes. The projected values of the homes is set at $250,000.

"This defined area within Richmond would pay Richmond tax, the West Fort Bend Management tax, the county tax, the drainage tax and the school tax," Smith said. "You are looking at an overlapping tax rate of over $3.33 for $100 valuation."

Smith said if commissioners grant consent for the district to extend its boundaries and build the homes, Richmond would be responsible for providing wastewater and water services to residents in the area. He said he would like to engage an agreement with the district before moving forward to decide what party would be responsible for maintaining improvements in the area that include drainage and detention basins and parks. Mayor Evalyn Moore tabled the action for a later meeting.
SHARE THIS STORY