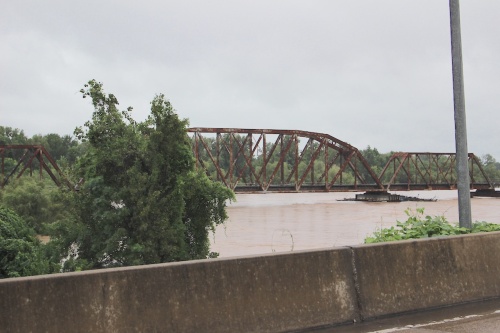 Flooding from the Brazos River due to massive amounts of rainfall from Hurricane Harvey contributed significantly to the damage Richmond suffered. After nearly two weeks since Hurricane Harvey ravaged the Texas coast, Richmond residents are still dealing with the aftermath of the storm that some weather officials are calling one of the worst disasters in Texas history.

A Richmond neighborhood on the east side of the Brazos River and several outside areas in Richmond’s extraterritorial jurisdiction were the most affected, Richmond Mayor Evalyn Moore said.

“The people that have been flooded out have lost everything, have lost their clothes, their furniture, their food—everything,” Moore said.

Fort Bend County experienced extreme flooding that left much of the area inundated for days, including Richmond. The Brazos River, which neighbors Richmond, passed the 2016 record flood level of 54.7 feet after reaching 55.19 feet on Aug. 31.

The emergency declaration issued for the county expires Sept. 12, but Fort Bend County Judge Robert Hebert said he expects it will be extended.

“The river is back within its banks …[but] we are still dealing with an emergency throughout the county,” Hebert said.

In late August, thousands of homes in Fort Bend County experienced major flooding: Over 5,000 people were rescued and two people died, as of Aug. 30. In Houston, the death toll has risen to 60 suspected flooding-related deaths, according to the Associated Press. Nearly 22 percent of the entire county was flooded at its peak, and 464 roads were closed while about 74 are still closed as the floodwaters continue to recede, according to Jeff Braun, emergency management coordinator for the Fort Bend County Office of Emergency Management. The county was able to open 29 shelters during the storm, and three still remain open as of press time.

Hurricane Harvey created a double punch of record rainfall and river induced-flooding, Hebert said. One factor that contributed to the rarity of the storm was the fact that Harvey stalled over the area for several days, which lead to the massive amount of rainfall and torrential flooding.

“Harvey is very unique because he strengthened so quickly so close to the coast,” Hebert said.

“And basically, every storm I’ve ever dealt with before came in—and you had 24-30 hours of miserable weather—and then they were gone somewhere; this was not the case with Harvey.”

Hebert said estimates at a minimum the county will have suffered at least $20 million in losses. He said now the county is focused on recovery efforts, which consist of debris management, damage assessment and addressing recovery issues.

“This is required by state and federal authorities to make sure that federal monies move as quickly as possible into our area and the state of Texas,” Braun said.

The damage Hurricane Harvey will cost Texas is estimated to be $160 billion, according to a statement from Joel Myers, founder, president and chairman of AccuWeather.

“The economy’s impact, by the time its total destruction is completed, will approach $160 billion, which is similar to the combined effect of hurricanes Katrina and Sandy,” Myers said in the statement.

People all over the Greater Houston area and beyond have helped with relief efforts, many of whom have been acknowledged in the national media. Local Richmond residents are also working to help those affected by the storm; on Sept. 5, Mauro and Celma Forastieiri, franchise owners of The Big Salad in Richmond, offered free meals to help with area relief efforts.

“What happened here is an unfathomable disaster. People here are hurting and they’re hungry,” Mauro Forastieiri said in a statement.

Disaster recovery resources in place include Federal Emergency Management Agency disaster survival assistance teams and disaster recovery centers that are being set up to help residents applying for FEMA assistance. Locations of the centers will be finalized after inspectors can assess proposed facilities and set up the centers, according to Caroline Egan, disaster recovery manager for the Fort Bend OEM. “We are encouraging all of our residents who have been impacted to register for FEMA assistance,” Egan said.

Hebert said most Texas counties are focused on dealing with the direct implications of their areas for the time being, but he thinks it is inevitable that the government will craft legislation to help provide more aid for those affected by Harvey.

“A significant portion of the state of Texas has water in homes, [there is] billions of dollars in damage,” Hebert said. “Nobody in recorded history has experienced the rainfall like this in Texas, maybe in the entire [U.S.] ... that’s the enormity of what we just went through.”

For some county residents, federal legislation could be critical.

“If your received benefits in a previous flood in Fort Bend County, you’re no longer eligible and they [FEMA] have to deny you,” Hebert said.

There are some gray areas to this rule though, according to Hebert. He said he and U.S. Rep. Pete Olson, R-Sugar Land, are working to help people denied by FEMA.

“He has set up a disaster recovery desk in his office and he will take each one of those [denied cases] and pursue them with FEMA and get you an answer,” Hebert said.

Hebert said recovery efforts and other implications of the storm like the impact on the tax rate could take weeks and even months to finish.

“This is the frustrating period in these floods,” he said. “We’ve been through this before; we’ve just never had so many people out there suffering. … It takes us time to get the assets and the equipment through the bureaucratic process ... but once we get started, things start to happen fast.”