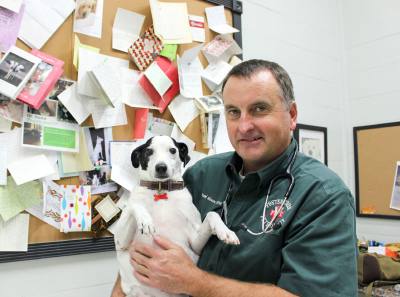 Dr. Michael Moore took a leap of faith when he sold Stafford Oaks Veterinary Hospital, where he had worked since high school and then later came to own and run for 13 years, and decided to open his own community vet hospital in Richmond in 2010.

Seven years later, Foster Creek Veterinary Hospital is moving from its original 2,500-square-foot 1929 historic building at the corner of FM 359 and Holmes Road to a 14,000-square-foot building on the adjacent property. Moore said he expects the building to be open by January 2018.

“I wanted to prove to myself that I could start something from scratch, I wanted it to all be mine,” Moore said. “And I guess the building is the culmination of all of that.”

Any guest that takes their pet to Foster Creek can usually tell right away the move to a larger facility is vital to Moore’s growing practice.

“I never thought that it would become what it has become, it’s just totally blown up,” Moore said. “I thought it would always be a one-doctor practice, but it’s taken off.”

Now a four-doctor practice, Moore said he decided to buy the historic building, formerly known as the Schultz store in Richmond, to be closer to his family and serve his community.

“I think it’s a great area,” Moore said. “I wanted to work for my neighbors.”

Moore said after the familiarity of running Stafford Oaks, the decision to start from scratch with Foster Creek was a big move.

“My biggest challenge here was just starting all by myself, hanging up the sign and hoping that people would come in,” Moore said. “I knew my medicine was good, I knew my people skills were good. I was scared that the growth would be slow because we were starting from scratch and I was totally wrong. It came quick.”

Moore said he thinks location, the growth of the surrounding area and the relationships he has built with clients are all contributing factors to the constant influx of business he has seen.

“I think we offer great customer service here; [customers] get a chance to really get to know the doctors,” Moore said. “I want people to feel comfortable coming in and hanging out. And the new clinic is like that, it has some really cool stuff that I think the community is going to like.”

The new 14,000-square-foot facility is directly behind the existing building and includes new additions, such as seven exam rooms, three surgery rooms, a full-service veterinary pharmacy and lab, and a soda fountain for children to enjoy root beer and ice cream. Foster Creek will also offer grooming services in the new facility.

Despite the abundance of animal vet clinics in the surrounding area, Moore said competition has never been a problem for him.

“I think in veterinary medicine we don’t look at each other as competitors. We are all trying to do the same thing and that is to help animals,” Moore said. “I think you build your clientele around the way that you practice.”

Moore said Foster Creek sees 400 to 500 animals in a week. Between managing the clinic, building a new hospital and constantly practicing, Moore said he is ready for the move.

“I’d like to tie this building down and be in and be done with it,” Moore said. “As far as being a veterinarian, the most challenging thing is you just never know what is going to walk in the door. It may be a runny nose, it could be a collapsed lung, or it could be a rabies shot, and you never know and you’ve got to be ready for everything.”

Moore said after he managed a second vet clinic while he owned Stafford Oaks, he does not wish to start a franchise or open a second location. In the far future, he hopes to sell the clinic to an associate or pass it on to his children.

“[The most rewarding part is] the people for sure,” Moore said. “I love the animals, that’s easy, everybody loves the animals. But I feel like it’s my friends that are coming in the door.”
SHARE THIS STORY