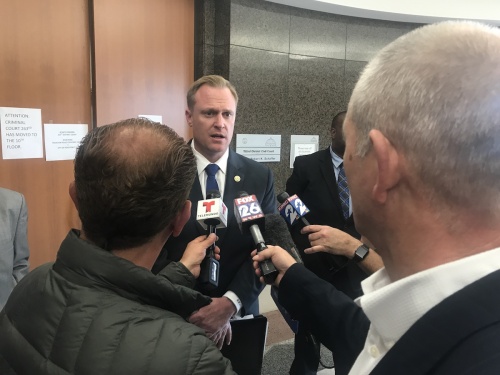 Marty Lancton, the president of the Houston Professional Firefighters Association, spoke following a court hearing regarding the constitutionality of Proposition B.

Update as of 5:09 p.m., April 18: Harris County Judge Tanya Garrison of District 157 sent a court order for parties representing the Houston Police Officers Union and the city of Houston to enter mediation with the Houston Professional Firefighters Association. Both parties have until noon April 22 to agree on a mediator, according to court documents.

The city of Houston and the Houston Professional Firefighters Union will not receive any additional clarity about the constitutionality of Proposition B ahead of some key dates in the city’s budget-setting process, including a vote on 220 firefighter layoffs April 24.

Harris County Judge Tanya Garrison of District 157 heard oral arguments April 17 presented by legal representation from the HPFFA and The Houston Police Officers Union alongside the city of Houston, both of which filed a joint lawsuit against the HPFFA, questioning the legality of voter-approved Proposition B and its associated pay raises for all Houston firefighters.

“[A ruling] won't be any time soon,” Garrison said. “There are four or five Supreme Court cases that I am going to outline and digest. There are reams of documents y'all have provided to me, but I haven't had a chance to thoroughly go through.”

While representatives from the city and the HPFFA both said a ruling either way would provide clarity on how to move forward, they also expressed some willingness to return to the negotiating table, especially if given a deadline for a ruling from Garrison.

“I think it's easier to reach a conclusion when you're not dealing with these constitutional questions and what they represent, but what I would suggest is that if we had an outside window within which we would not expect to hear from the court, that would incentivize the parties to try to reach a conclusion prior to that point,” City Attorney Ron Lewis said.

Garrison said while she understands the time-sensitive nature of the ruling, she is looking into ways to issue court-ordered mediation between the HPFFA and city representatives in hopes that they can come to an agreement. The last time the HPFFA, Mayor Sylvester Turner and other city representatives entered mediation was in June 2017, and it did not result in a collective bargaining agreement.

Following the hearing, HPFFA President Marty Lancton said he is willing to return to negotiations with or without a court ruling in place.

“I can tell you we respect the judge taking the time to look at this,” Lancton said. “We are here to be available and look forward to whatever the judge has to say.”