UPDATED: Sam Houston Tollway, Brazoria County Expressway and more: 4 transportation updates to know in Pearland and Friendswood in May 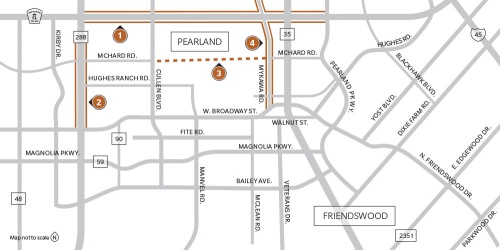 In May, the Sam Houston Tollway widening is expected to wrap up, officials said. Meanwhile work on the Brazoria County Expressway continues and the city of Pearland and Texas Department of Transportation look ahead to improvements on McHard and Mykawa roads.

3. McHard Road extension
Before the land mitigation proposal can be sent off to TxDOT for final review, the city must acquire the remaining parcels for right-of-way. Originally scheduled for May, it has been pushed to June. The goal of the project is to provide another east to west corridor in the city, relieving congestion.
Timeline: January 2020-January 2022
Cost: $33.63 million
Funding sources: city of Pearland and the Transportation Improvement Program

4. Mykawa Road improvements
TxDOT hosted a public meeting regarding the Mykawa Road improvements April 23. The project will convert the two-lane road to a four-lane road, create a 10-foot-wide, shared-use path on the west side and a 6-foot-wide path on the east side, as well as improvements to drainage consisting of storm sewer and detention ponds.
Timeline: 2021-23
Cost: $40 million
Funding sources: city of Pearland and the Transportation Improvement Program

A correction was made to update and clarify the funding sources for projects.