As Pearland and Friendswood residents find themselves in the midst of a busy hurricane season, the coronavirus pandemic has affirmed the importance of individual preparedness, city officials said.

“We have always asked individuals to have their family plan in place,” Friendswood Emergency Management Coordinator Brian Mansfield said. “I think it is very important individuals make sure they have their plan checked out prior to an event.”

During the pandemic, having a plan is even more important, as a city shelter will be a last resort for the sake of social distancing, officials said.

“A regular shelter [that was open] in the past might not be open this year,” said Remi Barron, external affairs officer for the Federal Emergency Management Agency.

This hurricane season, which runs from June to November, was predicted to be a busier season than past years. Judging by the storms that have formed so far, that prediction seems to be holding true, Barron said.

“I believe every storm that has come in has been the earliest named storm for that time period,” Barron said. “From what we have seen so far, it does seem to be a fairly busy season.” 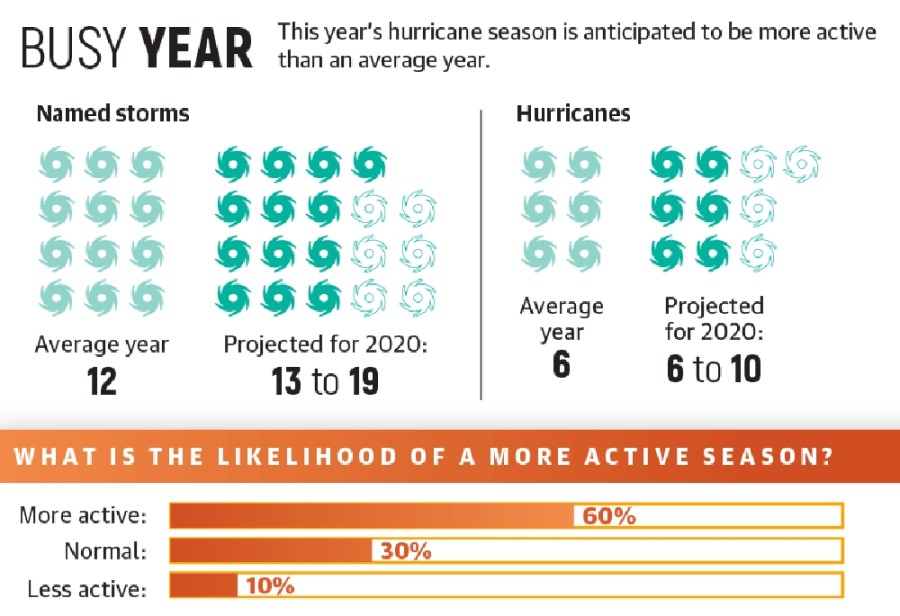 “More storms developing means a greater chance one of them will hit us,” Reilly said.

In late July, Tropical Storm Hanna made landfall in Corpus Christi and caused 3 inches of rain to fall in the Pearland and Friendswood area for roughly a week. FEMA has boots on the ground in south Texas but fewer than it would typically send due to COVID-19, Barron said.

“In the past, we would have more folks on the ground. In this environment, we are doing a lot of virtual damage assessments and inspections,” he said.

One of the biggest post-disaster changes this year involves recovery centers. In the past, FEMA has set up tents in a recovery area where people would show up for assistance. People can instead find that information on the agency's improved website or over the phone, Barron said.

FEMA has been preparing for a coronavirus-affected hurricane season since February, which as given the organization time to adjust its pre- and post-disaster responses, Barron said.

“It has been a welcome learning experience. The fact that the COVID-19 disaster happened when it did—several months before hurricane season—gave us a running start of how to deal with this,” he said. “There has been a lot of innovation, a lot we can use in the future.”

Pearland and Friendswood have both had to rely on virtual platforms to communicate important hurricane season information, officials said.

Making sure information is easy to save ahead of a hurricane is important to Pearland, Director of Communications Josh Lee said.

“Typically, we would have several town hall meetings and go to a bunch of groups. We would have large attendance from those folks and go over hurricane prep with them,” Mansfield said. “All of those things are really limited this year in terms of us being out and intermingling with the public.”

The city of Friendswood recommends evacuation out of the city for its residents when it is called for rather than relying on sheltering in a city building, even in pre-COVID-19 times, Friendswood Communications Specialist Jeff Newpher said.

In case of a hurricane or tropical storm, the city of Pearland is recommending residents be prepared to shelter in place or evacuate the city, depending on their living situation. Sheltering in city buildings will be a last resort due to COVID-19, Pearland Emergency Management Coordinator Peter Martin said.

“If the city has to shelter people, would we? Yes, but we want to minimize shelter,” Martin said. “We have been working with the Red Cross on how to shelter people during COVID[-19]. First, we would look at hotels; then, maximum social distancing.”

Brookside Village resident Eve Puckett’s family evacuated to a hotel during Hurricane Harvey. She is concerned about having to make the same choice during COVID-19, if it comes to that.

“You prep for the hurricane the same way, but for the evacuation, it’s like, ‘Where do you take your kids if you have to take them somewhere?” she said.

The other concern about evacuating to a hotel is capacity, Puckett said, as she is unsure if hotels would limit their capacity during a hurricane due to COVID-19.

Though COVID-19 has modified Pearland’s and Friendswood’s approaches to disseminating information and post-disaster recovery, both cities’ response to a disaster is shaped by lessons learned from Harvey.

“You don’t go through an experience like that without a bucket of lessons,” Martin said.

Both cities are working on drainage projects that started as a result of Harvey’s damage. In Friendswood, the city is continuing to work on drainage projects around Clear Creek and Imperial Estates. The work is in progress but has made a difference in flooding events the city has seen since Harvey, Mansfield said.

Pearland is moving through the drainage items on its 2019 bond, which included funds for renovations in neighborhood areas where a lot of water pools even during smaller rain events. However, as drainage projects take years to complete, the city will not see the full fruits of its labor this hurricane season.

“I think we will start to see that relief in areas that flood habitually in smaller intensity storms,” Pearland Director of Engineering Robert Upton said. “I think we are moving in the right direction.”

City officials recommend individuals prepare themselves in case of a flood, even with drainage improvements.

One of the best things homeowners can do for themselves is to get flood insurance, city officials said. 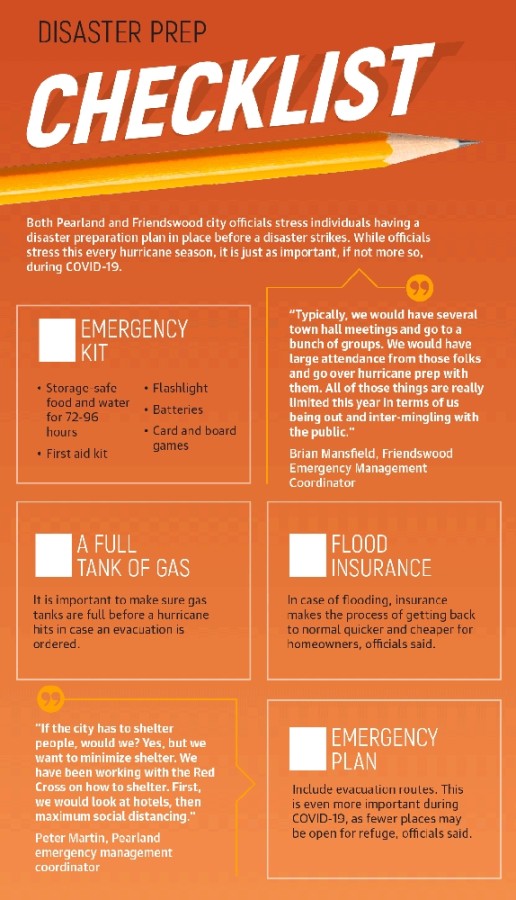 “If you have flood insurance, your recovery is going to be smoother. Just because you are not in a special flood hazard area doesn’t mean you aren’t going to flood,” Martin said.

Along with having flood insurance, residents need to make sure they can sustain themselves in their homes for 72-96 hours, Martin said.

Cities are able to get personal protective equipment to ensure the safety of both residents and first responders in case of evacuation, Mansfield said.

“If we evacuate folks out of the area or people are immediately displaced from their homes, there are certain things we need to do to protect them and our responders,” Mansfield said.

Residents need to prepare for evacuating, officials said, which includes evacuation kits with food and games as well as a plan of where to go.

“We want to drive the point home of personal preparedness,” Lee said. “That is something we can do in a COVID-19 reality or not.”