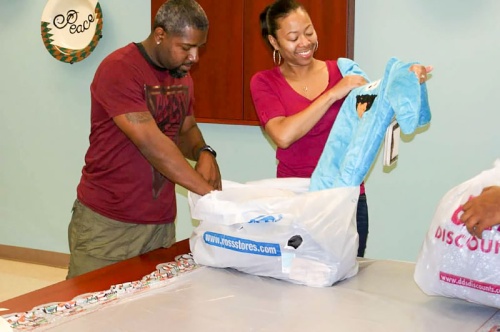 Infinite Hands Initiative volunteers have passed out coats and gloves to children at nine area shelters over the years.

The Infinite Hands Initiative hopes to hand out new coats and gloves to at least 100 children at Greater Houston area shelters this year, despite the fact that its founder and president is displaced from her own home after Hurricane Harvey.

Infinite Hands Initiative was founded officially as a 501(c)(3) in February 2012 after Karen Carter saw a need while volunteering in homeless shelters teaching workshops on employment and home-based businesses for the women. Carter said the women would ask her to do more of the sessions to help others in need.

Since around 2010, Carter estimates she has helped approximately 30 women start their own businesses, 17 of which are still running today.

Monica Valadez, owner of Moniva Inspired Creations, went through the program in 2011.

Carter said the more she went from shelter to shelter, she would realize there was a hunger.

“Maybe everybody didn’t feel that way, but a majority of the ladies wanted to become self-sufficient,” she said.

At the workshop graduations each fall, Carter said she would see many of the children in the shelters lacked proper coats and gloves for the winter, so she decided to start the Koats4Kids program. Over the years, Koats4Kids has given out coats and gloves to children in need at nine Greater Houston area shelters as well as ones in Webster and Galveston.

Carter said she starts soliciting donations from businesses each year in June or July. The money is then used to buy the coats at a discount from another organization called Operation Warm.

People can be make monetary donations on the organization’s website or via mail and can also donate new children’s coats and gloves. Volunteers are needed to load and unload coats, to set up the events where the children receive them and to work with individual families to get the right sizes distributed.

While currently struggling with her own recovery after Harvey, Carter said she finds comfort in helping others.

“It’s medicinal—it helps me not to focus on me,” she said. “It helps me to know that in the big scheme of things, we can still rise above and lend a helping hand to someone else.”