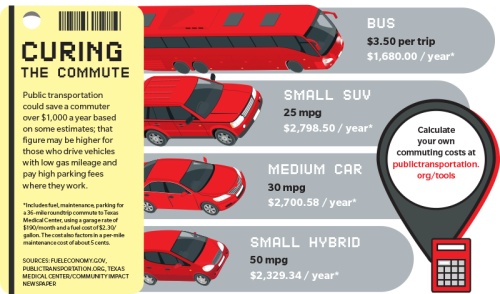 Pearland’s estimated 5,500 residents who work in the Texas Medical Center—city officials say it is home to the highest concentration of TMC employees by ZIP code—may soon have a new commuting option: a park and ride.

Moreover, the city might not even have to open its coffers to get it started.

“We’re getting to the point where outside entities are contacting us, and from our standpoint, we’re not prepared to put a large investment into it,” Deputy City Manager Jon Branson said.

These entities—some private firms, some public agencies—are interested in expanding transit services and already have the expertise, staff and vehicles to get started.

After years of incomplete deals with the Metropolitan Transit Authority of Harris County, which at one time purchased land in Pearland to build a facility, the city is looking at a pilot project with a private transportation company.

As early as mid-April, city staff could present options to the City Council. As the area has lacked a robust transit option, it could join similarly sized communities in the region—The Woodlands, Sugar Land and League City—that have been expanding their offerings to residents.

City staff initially presented the potential for a pilot program at Pearland’s strategic planning workshop Feb. 17. Council members welcomed the idea in concept and asked city staff to proceed, but several members were not on board with seeking a partnership with METRO.

“I just don’t trust METRO,” Council Member Trent Perez said at the meeting, citing Pearland’s dealings with the agency, whose service area does not include Pearland.

The agency came close to building a park and ride location at Broadway Street and Hwy. 288 in 2012, with the city of Pearland looking at paying around $320,000 a year to support it indefinitely—but a month after the land was purchased, METRO’s board of directors changed its policy on working outside its service area and dropped its plans for Pearland.

Perez and other council members told city staff to proceed cautiously when looking at a private partnership. One worry that council members expressed in February is launching a pilot might create an expectation for permanent service when the city is not positioned to fund it.

While a specific proposal is not yet finalized, Branson envisions it will be a three-year pilot program with a private vendor. The park and ride location would likely be at a location with ample daytime parking spaces—it could be a mall, movie theater or park.

One location identified by the city is the Shadow Creek Sports Complex, which has 474 parking spaces and has close access to Hwy. 288 and Beltway 8.

While the city is looking at a pilot that requires no up-front costs, it would have to provide parking and police services, Branson said. His biggest worry is not that there will not be enough demand but rather too much.

“If we start the program and the demand is too great for an area where we start, we will either have to make accommodations to expand the parking, which would have a financial cost, or we have or we have to look someplace else, not even in the same location, to accommodate cars,” Branson said.

A key factor in making this successful is going to be the per-ride cost for individuals, he said, which would be set by the vendor with input from city officials. Branson told the council in February that the rate could be higher than others because the city would not be subsidizing the service.

Elsewhere, rates range widely. For their TMC routes, Fort Bend’s service charges $7 roundtrip and The Woodlands charges $13. METRO’s fares vary by route, but from the El Dorado Park & Ride near Friendswood, the fare is $9 roundtrip.

Residents who see the value in public transit have not waited for the city to fill the gap, however. More than 1,750 residents with Pearland as their home city have registered for the METROStar vanpool service, and 228 are listed as actively using the service, said Monica Russo, a media representative for the agency.

According to METRO’s listings, there are two vanpools in Pearland that run Monday through Friday and go to the TMC. The pickup and drop-off site is off Grand Boulevard near Cullen. There is also a van registered in Shadow Creek Ranch and another in Friendswood.

“I love it,” said Ruth Reeves, who helps run one of the Pearland vans with five other riders. “I get dropped off at the door where I work. I can’t complain about that.”

She added the program gives her downtime and saves her hundreds of dollars a year.

“I’m a single mom and working in the med center. It was going to cost $300 a month for the garage, gas—I could not afford that,” she said.

Vanpools are a membership program, and the cost ranges from $50 to $250 a month with the average rider paying about $130 each month. However, many employers, including major hospitals at the TMC, cover part or all of the cost as a benefit, Russo said.

METRO also offers a free carpool network, and almost 60 carpools were registered in the Pearland area as of March 28.

Expanding METRO’s offerings in Pearland is not an option, the city said, because the agency’s policy for working with cities outside its coverage area is cost-prohibitive.

If Pearland wanted to bring METRO out to set up a park and ride program, it would have to cover the full costs associated with doing so, Russo said.

“It’s up to cities how they want to arrange that,” Russo said.

If cities opt to set up their own transportation programs, METRO is also open to partnering, she said, as it does with the Galveston Island Express program, which connects local routes on the island to downtown Houston.

“Anyone who sees value and benefit in public transportation, that’s what we’re about and we’re happy to work with them,” Russo said.

The Houston-Galveston Area Council, which is gathering public input on its 2045 Regional Transportation Plan, identified Pearland’s need for transit in earlier versions of its plan.

“Studies have shown that transit service between Pearland and the Texas Medical Center would be beneficial for those who work at the TMC, those seeking care at the TMC, as well as those driving along that path between Pearland and the TMC and experiencing congestion,” said Isaac Perez, H-GAC’s outreach coordinator. “This demand for expanded transit service is only going to be magnified as our region’s population grows more and more as we head into the 2045 horizon.”

If Pearland gets its pilot program, the city may find it is even more successful than expected. That has certainly been the experience for Fort Bend County’s public transportation department, which started in 2005 with two employees and now has a staff of 23, said Tennille Jones, manager of community outreach for the program.

“It’s almost like we can’t keep up with the demand; actually, it keeps growing,” Jones said.

The county expects demand for its commuter service will only keep growing, and with the help of federal and state grants—including Texas Commission of Environmental Quality funds, Congestion Mitigation and Air Quality funds from H-GAC and Texas Department of Transportation Section 5311 funds—as well as county matching funds, it has been able to keep pace.

Pearland is not eligible for these grants, but once it starts providing transit services, it will be, Branson said. One pocket of federal money, called 5307 funds or Urbanized Area Formula Grants, could have up to $1.3 million over 10 years available for Pearland, according to city estimates, Branson said.

That is an area where METRO comes into play again, because it is the agency that oversees how those funds are distributed for the Greater Houston area.

It is usage and demand that helps attract grant funds, Jones said. If Pearland wants to have a successful pilot and a sustainable program, it will need to work on marketing, outreach and education, she said.

“Once people know it’s there, when they understand how it works and how it can help them, with that support comes more usage,” she said.