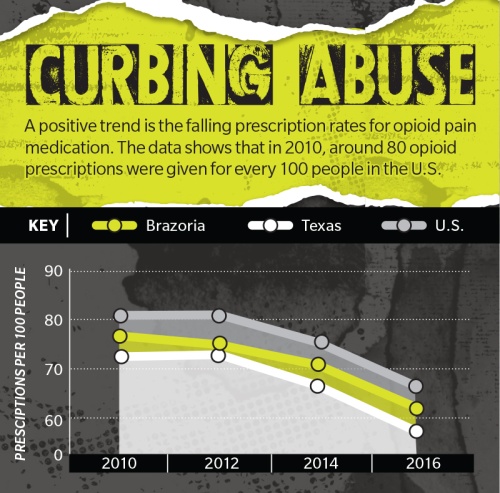 As the nation confronts the opioid crisis on the federal, state and local level, a first-of-its-kind clinic in Pearland is stepping in to fill a need in treating those confronting the powerful addiction.

Pursuit of Hope, which opened locations in Pearland and Angleton in December, said it is the first narcotic treatment clinic in the country to exclusively offer buprenorphine—an opiate-based medication that has been shown to help reduce dependency—alongside counseling and other resources.

The new clinic comes at a time when there is added focus on the problem both in terms of law enforcement as well as prevention and treatment across the country.

More than 90 Americans die every day from overdosing on opioids, according to numbers from the National Institute on Drug Abuse—almost 33,000 people each year.

The national crisis is affecting the Pearland and Friendswood region at a smaller scale, local officials say, but the problem has been growing.

“Houston is probably catching up to a lot of the communities in the Northeast and Midwest that have a more pronounced problem,” said Matt Feehery, CEO of Memorial Hermann’s Prevention and Recovery Center, which also has a Pearland location.

Houston overall ranks in the bottom half of the country for overdoses, he said, but the trend is going in the wrong direction.

“We are seeing an increase in overdose incidents and overdose deaths in all of our counties that surround Houston, especially Montgomery, Brazoria and Fort Bend,” he said.

State-level numbers show that deaths related to heroin, methadone and other opioids have increased recently, with 1,439 deaths in 2016 compared to 1,110 in 2012, according to a report compiled by the University of Texas School of Social Work.

Feeding into the problems of addiction and death is the over-prescription of opioids to treat pain, Feehery said. The medications are very effective at reducing pain, but dependency can form in as little as seven days, he said.

Once addicted to pain pills after a surgery or a broken bone, for example, patients might seek out refills or new prescriptions, or seek out highs elsewhere—about 80 percent of heroin users first abused prescription drugs, studies show.

“It actually turns out being a gateway drug for people unintentionally. They have a legitimate pain issue. They take the medication for a period of time long enough to be problematic for them, then they find that they can’t easily stop, and they can’t get off the medication,” Feehery said.

Texas’ Prescription Drug Monitoring Program requires pharmacies to keep track of who has been prescribed opioids in an effort to curb “pill mills” that over-prescribe to potential addicts, although doctors are not necessarily required to check the database before prescribing.

Based on numbers collected by the Centers for Disease Control and Prevention, which tracks the prescription rate of opioids, Brazoria County peaked in 2010 with 77.1 prescriptions per 100 people. However, it fell to 62.3 in 2016, lower than the national rate of 66.5.

Growing awareness of these drugs’ potency and fears of addiction could play a role in reducing prescriptions going forward, Feehery said.

“I think education is key to getting people to change the way they approach dealing with pain conditions,” Feehery said. “I am finding that more and more people are conscientious about this. … They’re talking to friends and family, and they’re mentioning, ‘I don’t really want to take those medications because this happened to me,’ or, ‘I don’t want to have that [addiction] problem.’”

Local law enforcement has not seen a spike in opioid cases, but officers said they are aware of the trend.

“We are seeing it, and we’ve always seen a little bit, but our numbers have not spiked,” Pearland Police Department spokesman Jay Wells said.

Pearland had four cases of drug overdose last year, he said, but whether they were tied to opioids was not immediately clear. Seizures of opioids have also been trending downward, he said, with the most, 23, occurring in 2013 and only 12 in 2017.

The Brazoria County Sheriff’s Office also reports that opioid cases do not appear to be on an upward trend.

“With the northern border of our county joining the fourth-largest city in the U.S., the cases overall really aren’t that alarming by number,”  Lt. Varon Snelgrove said.

In October, Texas Attorney General Ken Paxton issued a statement that clarified that police officers can use naloxone, a fast-acting drug that can reverse the effects of an overdose in a victim, making it a potentially life-saving tool in the field.

Police officers for Pearland and Friendswood and Brazoria County sheriff’s officers do not carry naloxone, but their EMS teams do, officials said.

“We just don’t have the usage out there to demand that,” Wells said, adding it is not off the table for the department to obtain it if that changes.

Friendswood Police Department officials also said they do not have plans to get the drug.

Anyone can purchase naloxone, often sold under the name brand Narcan, at any pharmacy that has been vetted by the Texas Pharmacy Association.

A state law that took effect in 2016 allowed any physician to issue a prescription to any third party or to issue a standing order, which the pharmacy association did that year, allowing pharmacists to provide the drug to anyone.

The drug is available as a nasal spray, a pre-loaded injection or in a vial that can be administered with a syringe. The drug can stop the effects of an overdose for 60 to 90 minutes, giving the person enough time to get to a hospital for treatment.

Whether confronted by a police officer, a loved-one’s intervention or by surviving an overdose, some addicts come to the realization they need help, but whether resources are accessible and affordable is another question.

Clinics aside from Pursuit of Hope that offer medication-based addiction treatment typically offer methadone in addition to buprenorphine. Both medications are opiates but are approved for treating addiction. However, studies have shown that buprenorphine is less likely to lead to an overdose and is more effective overall.

Medication alone cannot cure an addiction, which is why many clinics include counseling as part of the treatment plan.

“We believe we distinguish ourselves through the whole emphasis of partners for life,” Pearson said, referring to the struggle that addicts face beyond their initial recovery. “We are making sure every patient that comes through our doors is treated with the utmost respect. They’re treated like human beings.”

This approach was echoed by Feehery.

“To build recovery and maintain it, it’s really like giving people a set of tools to manage their addiction,” he said. “Addiction is a disease. It’s a brain disease. It’s the kind of thing that you have to manage going forward.”

Pearson, who has clinics in Pearland and Angleton, has plans to set up 20 locations in Texas over the next three years. The goal is to serve around 500 people at each location.

“But we could build 20 of these and it still wouldn’t be enough facilities to service the need in the state of Texas,” because of the underserved need that’s out there, he said.

The company is working with a consultant and is using data to target areas that have greater needs. The decision to open in Pearland and Angleton first was driven by the area’s need and the location of Dr. Parker, who is also a partner in the venture, Pearson said.

Statewide, the number of people admitted to programs that treat heroin and prescription opioid abuse has decreased from a peak of 14,353 admitted in 2014 to 12,874 in 2016, based on numbers compiled by the Texas Health and Human Services Commission.

The cost of treatment, on top of the stigma of confronting mental health challenges, may be preventing more from seeking help. According to National Institute on Drug Abuse, medication-assisted treatment of opioid addiction can cost more than $6,000 a year. By comparison, treatment for diabetes averages $3,650, according to the agency.

Addiction treatments are covered by insurance in many cases, which has opened up more opportunities for providers and patients alike.

In May, the Texas Health and Human Services Commission received $27.4 million in federal funding to combat the opioid problem in the state, part of which is slated to go toward treatment services.

Pearson said even more state and federal grants, especially with the emphasis coming from President Donald Trump’s declaration of the crisis in October, could help bring down the cost of the treatment.

“A lot of families can’t provide the cost of service,” he said. “We’re passionate about helping not just the individual going through these unfortunate circumstances but also the families and friends.”