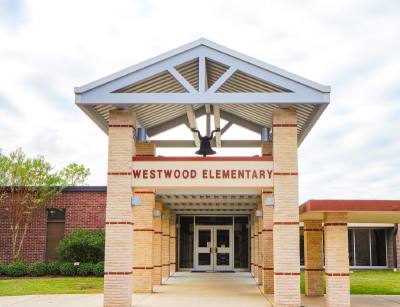 “Since I’ve been there, the technology is really stepping up,” Hobratschk said.

Hobratschk was principal of Westwood from 2004-2012. During that time, she worked with the PTO to get laptops for the teachers in 2004. The school’s PTO was established in 1968, one year after the school opened.

“We were probably one of the first campuses [in the district] to give each of our teachers a laptop computer. Teachers in the district were accustomed to having desktops,” Hobratschk said.

Other than the technology, not much changed in Westwood over her years as principal.

“Westwood had so much rich history and so much pride within it that it wasn’t something to change; it was just something to keep developing,” Hobratschk said.

Located at 506 W. Edgewood Drive, Friendswood, the school still stands in its original building. The office wing of the building was added in 1993.

As the oldest of FISD’s elementary and intermediate schools, Westwood was built in 1967.

At one point, Westwood held 900 students, and operated out of portable classrooms as well as the elementary school. After this, Bales Intermediate School was opened in 1994.

Westwood has decreased in enrollment over the years. When Hobratschk was principal, the school had around 700 students.  Now, the enrollment numbers are closer to 500. This is due to more schools in the district being open as well as a decrease in students in the district, Hobratschk said.

One of the traditions Westwood has carried on is being named a School of Character. Westwood was named a school of character in 2007, during Hobratschk’s tenure. According to Hobratschk, this is one of the primary focuses at Westwood.

“That character development has been great at that school, and we believe in working with the whole child and that continues to be a focus,” Hobratschk said.
SHARE THIS STORY