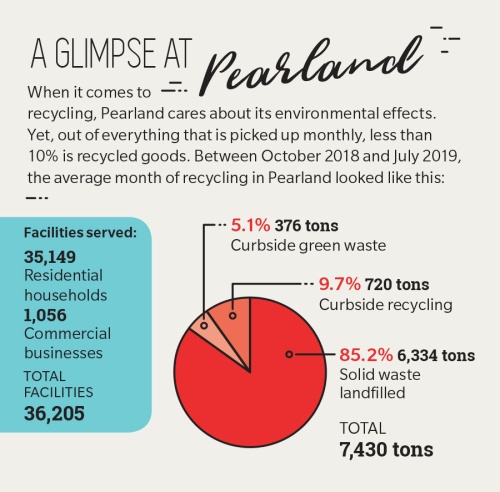 Recycling policy changes have been echoing across the country and the state, and Pearland, a city with a direct link into the recycling process through the Stella Roberts Recycling Center, is looking toward education outreach to face those possible changes.

With the center close by and numerous education programs in place to encourage residents to recycle correctly, many of which are run by Keep Pearland Beautiful, the organization that runs the center, the city is depending on residents to take initiative to continue the trend of clean recycling through the effects of different policy changes. Recycling became a topic of debate last year, according to Jordan Fengel, Texas State Alliance for Recycling’s executive director, when China enacted new standards for how much contaminated recycled waste it was willing to buy.

“The people of Pearland have a great resource in Stella Roberts,” said Adrian Hernandez, the executive director of Keep Pearland Beautiful. “We want to make sure people know what’s in place for them.”

A common misconception about recycling is that when it gets picked up at the curb, there is a straightforward path for it to become new, ready-to-use products. The reality is a bit more complicated and involves more people along the way, Waste Connections District Manager Abel Moreno said.

“We take our recycling the Seabreeze Environmental Landfill, then it’s shipped to Gasmer Recycling Center in Houston, then sold to secondary buyers,” Moreno said. “All these steps have workers and transportation fees. Right now, I’d say it costs three times more to recycle than it does to put it in a landfill.”

After recycling is sorted, it is sold to a secondary buyer responsible for reusing it. For many years, the largest buyer of recycling from America was China because it accepted lower-quality plastics and higher contamination rates, Fengel said.

China is still accepting recycled plastics, but its contamination standard is now 0.5%, meaning if a shipment of recycling contains more than 0.5% nonrecyclable waste, it is not accepted.

In the average American town, 25% of all recycled items are nonrecyclable waste, according to the website of Waste Management, a waste services company that handles garbage as well as recycling.

Moreno said that in his opinion, the cleanest city he handles still has a contamination rate of about 40%.

“Facilities that take our recycling, they’re telling us were having a hard time finding buyers for recycled materials because it’s not as clean,” Moreno said. “The No. 1 buyer was China; they’re the ones creating and manufacturing from all these recycled materials, and since they’re not buying it, the cost is going up.”

Fengel said these recycling standards are the most recent in a series of requests made in the last 13 years.

“Contamination has been the main issue when it comes to recycling, but we just got numb to it as an industry,” Fengel said.

In Pearland, those higher costs due to contamination will be passed onto residents until contamination rates can be lowered, according to Hernandez.

Local recycling programs are a major way individuals can learn about how to make a difference, Fengel said.

“Take that bit of initiative and see what your local recycling program accepts,” Fengal said.

Located in Pearland, the Stella Roberts Recycling Center is a facility run by Keep Pearland Beautiful that offers free recycling services to Pearland and Brazoria County residents. Those who do not live in Pearland or Brazoria County are also welcome to bring recycled materials there for a donation of $1 per pound.

The operations are funded by the KPB nonprofit, which runs on donations and also receives a percentage of the city of Pearland’s waste contract franchise fee. The center serves as a collection site for various recyclable materials, from the typical plastics, papers, and glass to more unusual materials.

“We have the bins in front to collect textiles, not just clothing but all kinds of textiles,” Hernandez said. “We also take electronics, which is everything from printers to computers to monitors and televisions. Even appliances like refrigerators, dishwashers.”

While most of the materials collected at Stella Roberts are sorted and then sent to a secondary processing location, the center does process recycled glass.

It is unusual for cities of Pearland’s size to have their own recycling centers, and its existence is a significant resource for those looking to improve their individual recycling habits in the Pearland area.

KPB’s mission is to empower Pearland residents to take responsibility for the environment, Hernandez said, and the most important thing KPB can do in response to changing recycling policy in China and the country is to emphasize education.

“We’re continuing to try to expand our education outreach with the hope that we can reduce contamination rates first and foremost,” Hernandez said. “We are doing that rather than focus on policy changes since changes in the market won’t directly impact the facility.”

Some of that outreach occurs at public events throughout the year, such as the Earth Day celebration, communitywide cleanups, or Recycle Day. Other outreach is through programs in schools to introduce children to recycling.

Some of those recycling guidelines include not recycling Styrofoam, boxes with food in them, plastic shopping bags, zip-close bags and other low-quality soft plastics. Rinsing out plastic and glass containers is also a good general rule to follow.

“After we lower contamination rates, then we can focus on having more people recycle,” Hernandez said.

On a statewide scale, state Rep. Ed Thompson, R-Pearland, has passed several pieces of legislation regarding recycling, landfills and other environmental concerns.

“Considering the current volatility in the recycling market, I believe it’s imperative the state step in,” Thompson said. “This critical industry has a significant impact on the Texas economy, and we have a chance to drive even more jobs here through [Senate Bill 649].”

SB 649, which went into effect on Sept. 1, requires the Texas Commission on Environmental Quality to work with the Texas Economic Development and Tourism Office to produce a plan to stimulate the use of recyclable materials as feedstock in manufacturing. Feedstock is a raw material that can either be used as fuel or converted into another energy source.

This bill prompts the state to make a plan that includes an interim report that will come out next fall. It will look at the barriers prohibiting the materials from getting to the people who need to use it then address how the state can help drive that force by either supporting current recycling manufacturers or incentivizing them to come to Texas, Fengel said.

Other passed legislation includes House Bill 1953, which addresses the recycling of plastics into fuel.

HB 1953 is meant to help create new markets in Texas that utilize traditionally nonrecyclable plastics, such as shopping bags and other single-use plastics, through a new technology called pyrolysis. This process entails materials being decomposed at a high temperature without oxygen or fire. This bill went into effect May 17.

“This will change plastics to fuel through legislation,” Thompson said. “It will help on products that we can no longer export to China and puts Texas sort of on the cutting edge of the industry.”