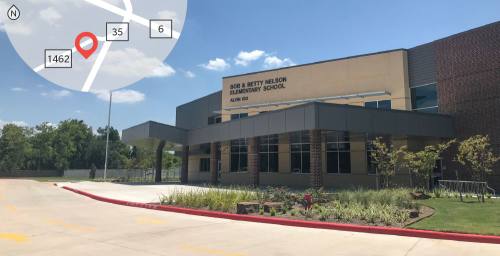 Both schools opened this year and are already near capacity as the district is growing rapidly. Sanchez Elementary has roughly 740 students, with a capacity of 800, AISD Director of Communication Renae Rives said.

“A lot of districts don’t have that issue because they are not growing, but that is an issue we are definitely facing and have been facing for a while now,” Rives said. “It’s a great problem to have. We just try to make sure we are staying ahead of the growth.”

“Our population has just exploded in certain areas in the district and that school [the students] were in was very old and in need of major repair,” Rives said.

Sanchez Elementary was built in Rosharon, an area the district anticipates on seeing more growth.

“All of that area is growing so fast that we needed to make those accommodations and make sure we were on top of that,” Rives said.

The district has plans to open Junior High School No. 8 and possibly another elementary school for the 2021-22 school year. While the bond is paying for multiple schools, the majority of new schools will be elementary schools, as that age group is where the district is seeing a lot of growth, Rives said.