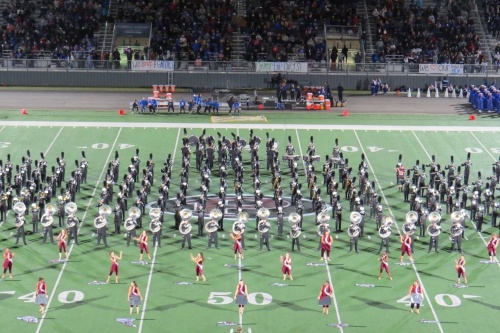 The Pride of Pearland marching band was selected to perform at the 2020 Rose Parade.

The Pride of Pearland, Pearland High School’s marching band, has been chosen to perform in the 131st annual Rose Parade on Jan. 1 in the Tournament of Roses. The band was chosen for a number of reasons, most notably its members community service efforts, 2020 Tournament of Roses President Laura Farber said.

“I’ll tell you what is special about Pearland that we noticed when we were looking at the applications. The most important thing we loved about this band was the community engagement. Their specific efforts during Hurricane Harvey, that was a story,” Farber said. “That motivated us. That story was so impressive to us, and we said, ‘Wow, we have to choose this band.’”

The band was one of 16 chosen out of over 100 national and international applicants and the only Texas band selected this year. While Texas bands have marched in the parade in the past, the Pride of Pearland has never marched in the Tournament of Roses. Other bands chosen include an all-female band from Copenhagen and a band from Japan.

In addition to community work, the bands are judged based on musicality and marching skills. The band also has to have community support as it has to raise the money to afford the trip to Pasadena, California, for the parade.