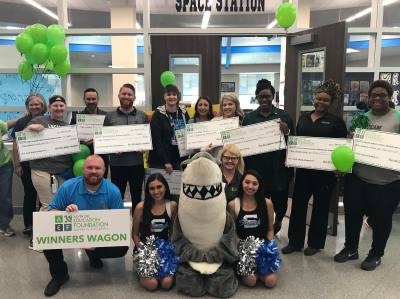 The Alvin ISD Education Foundation Winners Wagon surprised 153 teachers on 26 different campuses on April 25 to award innovative teaching grants, according to a media release from the foundation.

The foundation awarded $83,148.95 in grants to teachers and staff across the district, the media release stated.

Foundation board members, Alvin ISD officials, school trustees, parents and community partners rode on school buses from school to school to award the grants, according to the media release.

“The students brought the spirit and the fun to the Winners Wagon, and they let everyone know that something exciting was happening,” Carol Nelson, lone finalist for AISD superintendent, said in the media release.

Students joined in the celebration as staff members at each campus received giant-sized checks, the media release stated.

“It is exciting to surprise these teachers and provide extra money to implement innovative ideas in their classrooms,” Sheila Olson, foundation executive director, said.

Staff members will use the grant dollars to implement various initiatives supporting student achievement and success at their schools, according to the media release.

“We are so proud of all our grant recipients this year and can’t wait to see their grants in action,” foundation board President Amy Roudbari said in the media release.

The INEOS ICAN Foundation, a Texas nonprofit, awarded the foundation a $7,300 grant this year, according to the media release. With those funds, the foundation gave an additional nine grants focused on Science, Technology, Engineering and Math. The city of League City has published a notice of intent to issue certificates of obligation to fund part of a $22 million project to upgrade a water line.

The district will offer vaccines to Pearland ISD families on June 18.

Natural Rewards has been a holistic health business in Pearland for 23 years.

Three hospitals near Pearland and Friendswood

The realities of COVID-19 have led to the exacerbation of an already-present nursing shortage across the Texas Gulf Coast region, which includes Houston, local and regional experts said.

“We wanted to bring this visibility to the LGBTQ+ community, and we wanted to show them a safe space and make sure that they were supported,” Pearland Youth Movement President Vidya Muthupillai said

Brazoria County residents to have an opportunity for rental assistance

Those affected by COVID-19 may be able to get assistance with paying rent and utilities.