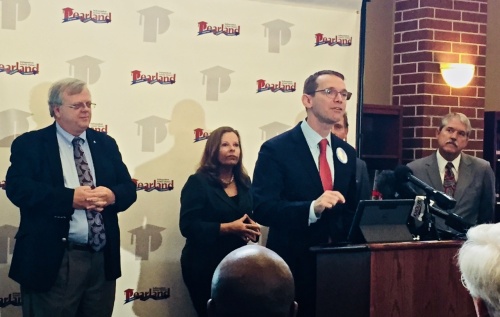 Texas Education Agency Commissioner Mike Morath told community leaders that Pearland ISD was among the top-performing districts in the state under the new A-F ratings.

Pearland ISD is an example of how the new A-F ratings will help the state identify top-performing districts that need to export its best practices, Texas Education Agency Commissioner Mike Morath told community leaders Wednesday as part of a tour to unveil the first release of the rankings.

Out of 116 districts with 10,000 or more students, Pearland had the third highest overall rating, and of those, it had the highest percentage of economically disadvantaged households, Morath said.

"We see ourselves as a potential for a model of how everybody can work together to achieve these high things if we have common goals," Superintendent John Kelly said, pointing to how the district benefits from Pearland's diversity.

Pearland earned a score of 94, or an A overall under the A-F ratings, which assesses school and district performance across three categories: student achievement, school progress and closing the gaps. How each grade is calculated is explained in an interactive report published at www.txschools.org.

While standardized tests such as the STAAR, ACT and SAT are significant indicators in the student achievement category, other metrics are included, such as military enlistment, earning an associate's degree before graduating or completing a technical education sequence.

Data in the student achievement category is also used to determine the school progress rating, which measures how much students improve year over year and how well the school performs given its proportion of economically disadvantaged students. In this category, Pearland ISD earned a B.

The "closing the gaps" score also relies on STAAR and other measures from the student achievement data, but compares ethnic groups and other classes to determine how well each group is meeting standards. Pearland received an A for this category.

Despite the accolades, Kelly downplayed the importance of the ratings in driving how the district operates.

"We're not worried about the accountability system, we're going to meet or exceed it, whatever it is," Kelly said.

He gave major credit to Nyla Watson, senior assistant superintendent of instructional programs, for her work in leading curriculum development and supporting teachers. She, too, said the recognition was nice, but was not the ultimate goal.

"If we're doing the right things, we'll be OK," Watson said. "We believe in our structure and our way of doing things."

Watson said a key to their success is managing the goals that are set for teachers—setting fewer, manageable but important goals rather than overloading and missing the mark. Data collection is also key, but there is another more important step, she said.

"You can collect all the data you want, but you have to have a plan on how to use it," Watson said.