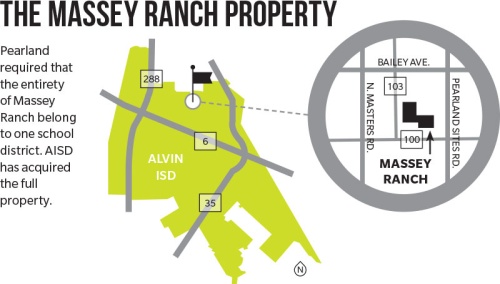 Pearland required that the entirety of Massey Ranch belong to one school district. AISD has acquired the full property.

The neighborhood is made up of 975 planned lots, 650 of which were originally allocated to AISD. The other 325 were allocated to Pearland ISD, said AISD.

The city of Pearland acquired the property in July through voluntary annexation and decided the area must be completely within one school district.

“Alvin ISD received a request from the land developer of Massey Oaks to reverse the 1996 transfer of 0.2 square miles of land from Alvin ISD to Pearland ISD,” Alvin ISD Board President Nicole Tonini said. “After receiving the request, Alvin ISD along with the city of Pearland and Pearland ISD engaged in conversations largely focused on limiting the confusion associated with having a neighborhood divided by school district boundary lines.”

Both districts agreed to a minor boundary change to give the schools completely to AISD- AISD at its Nov. 14 meeting and PISD at its Nov. 28 meeting.

While AISD has no existing plans to build schools in the development, it is a possibility in the future, said Daniel Combs, assistant superintendent of professional learning and student and community engagement.

“The location and timing of future schools is largely dependent on the number of students that reside in that particular geographic area and the available capacity of nearby schools,” Combs said. “To this point, Alvin ISD has not formalized any plans regarding a future school in this development.”

The Massey Oaks development was originally completely within AISD’s boundaries. In 1996, roughly a third of the development was transferred to PISD at the request of resident whose child attended a PISD school. Now that the child and their family have moved, Massey Oaks Development, LP, has bought the land and requested that the area be allocated back to AISD, according to Alvin ISD.

The request that Massey Ranch be allocated to one school district came from the Pearland City Council. The council moved to allow the developers to continue building Massey Ranch, but it had to belong to one district.

“Alvin ISD has been experiencing rapid student growth for a number of years and we anticipate this growth to be commonplace in our district for the foreseeable future. There are a number of current developments, some smaller and some that exceed 6,000 projected homes, within the Alvin ISD boundaries,” Combs said.

Alvin ISD is currently building new schools in their district, which have been funded by the 2015 bond. Pomona Elementary and Shirley Dill Brothers Elementary opened for the 2017-2018 school year.

“The addition of the Massey Oaks development will be handled in much the same way Alvin ISD works to accommodate students from across our district,” Combs said.