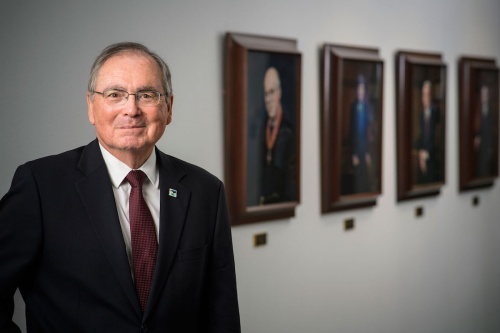 University of Houston-Clear Lake President Bill Staples will retire in August. Four finalists have been announced as possible successors to the presidency.

The University of Houston-Clear Lake Presidential Search Committee announced four finalists on the path to succeed longtime President Bill Staples, who will retire in August.

“I feel very good about this transition in leadership at this time since UHCL will now continue to evolve as a four-year university,” Staples said. “I look forward to seeing UHCL continue to grow as a high quality, student-centered, partnership-oriented and community-minded university.”

The finalists are Ira Blake, Lawrence Dreyfus, Frank Lamas and Cheryl Lovell, according to UHCL. All finalists were interviewed on campus in a public forum between March 28 and April 25. The 15-member UHCL Presidential Search Committee is expected to complete a report as early as this week, listing the strengths of weaknesses of each candidates, said Lisa Gossett, a member of the search committee and the UHCL Faculty Senate president.

The report will be sent to UH System Chancellor Renu Khator, who will announce her appointment. The final candidate will go before the University of Houston System Board of Regents for final approval.

“Earlier this year, the committee held open forums with the UHCL community to provide information about the process and to get input from them about the qualities and attributes they were seeking from the next UHCL president,” said Richard Walker, chair of the UHCL search committee and vice chancellor for student affairs and enrollment services for the UH System. “UHCL hopes to be welcoming a new president in the near future. That president will build on institutional strengths to ensure continued success.”

Currently, the earliest scheduled board meeting in which the regents could make a decision is Aug. 24, according to the UH System calendar, but a special meeting could be called earlier.

Blake received her doctorate in developmental psychology from Columbia University.

She is currently a provost and senior vice president for academic affairs at Bloomsburg University of Pennsylvania, which she has held since 2009. She was previously an associate vice chancellor for academic and student affairs at Dixon University Center as well as an interim dean of the college of education at Kutztown University in Pennsylvania. Her university teaching experience spans from 1980 to 2004, according to her curriculum vitae provided to UHCL.

He currently serves as the vice chancellor for research and economic development at the University of Missouri-Kansas City, where he has been since 2012. Previously, he serves as an institutional official, dean of the school of biological sciences, director of research and faculty chair of the biological sciences department. His teaching experience extends from 1984 to 2003, and includes seven years at the University of Texas Medical Branch-Galveston, according to his curriculum vitae provided to UHCL.

Lamas received his doctorate in educational administration and policy studies at the State University of New York At Albany.

More information about the finalists can be found online at www.uhcl.edu/presidential-search/finalists.aspx

Staples announced his retirement from UHCL in September of 2016 after more than 20 years in the role; he is the fourth university president. UHCL was established in 1974, only five years before Staples was hired as an associate professor. He rose through the ranks, serving as a program director, associate dean and then dean of the university's college of business before being tapped to become president in 1995.

"It has been a distinct honor and privilege to serve as UHCL’s fourth president for the past 22 years. I have enjoyed serving UHCL in various roles since I joined UHCL 38 years ago in 1979.  Working with my faculty and staff colleagues at UHCL and our many community partners we have expanded student access to higher education in this region, including at UHCL, UHCL Pearland Campus, the Texas Medical Center and online.  Our number one goal has remained student success which covers everything from new student orientation to graduation," Staples said.

During his tenure, Staples saw the transformation of UHCL from an upper-level university—providing only junior-, senior- and graduate-level coursework—to a four-year institution in 2014, when it matriculated the first UHCL freshman class.

One of the most significant milestones for Staples was the creation of UHCL’s Pearland campus, the university’s only satellite. UHCL Pearland was established in 2010. The Pearland campus broke ground on its second building on April 28.

The new health sciences and classroom building will focus on health care course offerings and house the university’s nursing program. The building will also house a satellite center of the UHCL Center for Autism and Developmental Disabilities.

The $19.7 million building is slated for completion by January of 2019.