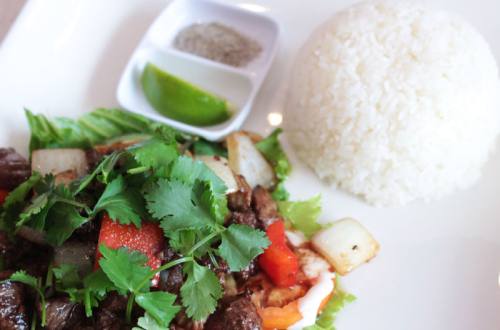 Hai Vo had already been in the service industry for 20 years when he and two friends decided to go into the restaurant business together and open Pho L’amour Noodles & Grill, a Vietnamese restaurant located on Shadow Creek Parkway. Also the owner of Crystal Nails in Friendswood, Vo said he felt he was prepared to face the challenges of running a restaurant.

“I really enjoy running Pho L’amour,” Vo said. “There’s more to do, and I get to see a lot of people through the day.”

The restaurant, which opened at the end of last year, serves authentic Vietnamese food, including pho, a popular noodle soup. Pho is traditionally eaten as a breakfast or lunch meal and can be served with a variety of meats and proteins.

Vo pointed to the steak and brisket pho as a popular customer choice but mentioned the shaking beef fried rice entree was his personal favorite dish on the menu.

Many of Pho L’amour’s frequent customers include employees from nearby businesses looking for a place to get lunch during the week. The city’s growth and business-friendly atmosphere were some of the major reasons Vo and his two partners, Phu Nguyen and Sonny Nguyen, landed on Pearland as the location for their restaurant.

“We looked all over Houston and eventually decided that Pearland was the right place to open,” Vo said. “It’s a growing city with a lot of new business from smaller stores to big companies, so it’s where we wanted to be.”

Before opening Pho L’amour, Vo and his partners ran a pool hall with Vietnamese bar food together. That venture, in addition to their relationship with an experienced chef, made the restaurant business look even more exciting.

Vo said as the restaurant reaches its anniversary, he is looking forward to more business and success. His goal right now is to bring in more people during dinner to match the lunchtime rush.