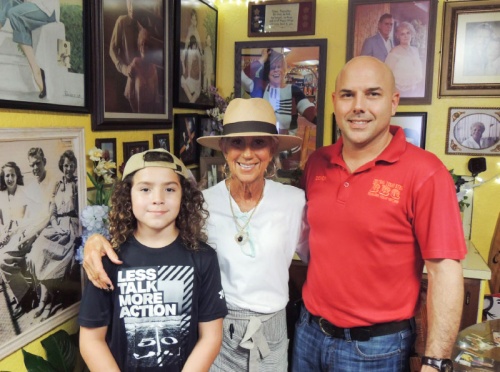 Central Texas Style Barbecue, a popular family-owned eatery, celebrated its 50th anniversary in June, making it one of the oldest restaurants in Pearland.

For owners Devon Nixon and Ruth LeClere, the 50-year celebration passed by in a blur.

“We normally keep our heads down and focus on the work in front of us, so it’s hard to take time to sit back and reflect on 50 years,” Nixon said. “It crept up on us.”

Nixon’s grandmother Diana LeClere and mother, Ruth, began working at the restaurant in 1969 and bought it in 1970 for $10,000. Diana, the original matriarch of the restaurant, died in 2018.

“It’s kind of bittersweet because my mom passed away last year,” Ruth said. “We were always planning to have a big party, but it’s hard to celebrate without her.”

The Cuban influence Diana incorporated into their recipes and methods of cooking set Central Texas apart from other barbecue eateries, Devon said.

“It’s how my grandmother would’ve originally done the same food in Cuba,” he said. “They cooked with wood, and that’s something she carried forward, so it was very natural to barbecue.”

“We could’ve been any kind of restaurant had our ancestry influenced it to be something else,” Nixon said. “It just so happens that it was a natural fit for my grandmother and my mom at the time.”

Some of the restaurant’s most popular items are its brisket and its baked potato with sliced beef. The restaurant also offers a brisket grilled cheese for lunch on Wednesdays. There are also nonbarbecued offerings, including a Cuban sandwich.

“I want people to feel like they’re at their grandmother’s house,” Ruth said. “Feeling comfortable and eating good home-cooked food.”

Central Texas has three generations currently working in the restaurant, including Nixon’s sons, Julian, Jude and Devon II. Jude, 18, became a certified chef when he was 17, and he plans to continue the family tradition.

“He’s going to be the person that will carry on the same passion that we have,” Nixon said. “Hopefully for the next 40 or 50 years until someone else takes that from him.”