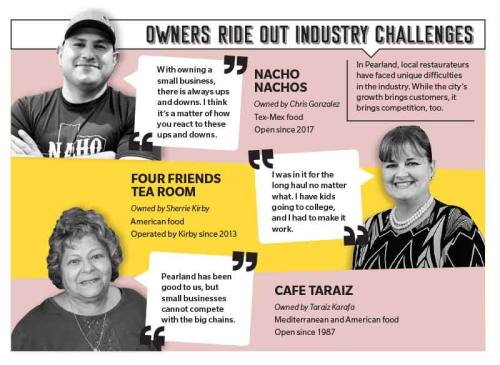 Restaurateurs have faced unique difficulties in the industry in Pearland as the growth brings customers, as well as competition.

After running a successful food truck for a year, Nacho Nachos owner Chris Gonzalez decided to open his brick-and-mortar shop in 2017 in Pearland near the Pearland and Friendswood border. While the food truck’s success has not waned, the restaurant has had its share of difficulties, Gonzalez said.

“With owning a small business, there is always ups and downs. I think it’s a matter of how you react to these ups and downs,” Gonzalez said.

Gonzalez is one of several local restaurant owners who has had their share of difficulties in Pearland. With the city growing rapidly, the number of restaurants has grown, too. The city has added over 100 restaurants in just the last five years, according to city of Pearland Code Enforcement data.

“Pearland has been good to us, but small businesses cannot compete with the big chains,” Cafe Taraiz owner Taraiz Karafa said.

Keeping up with costs
One of the struggles with a standing restaurant compared to a food truck involves more overhead, or operational costs, Gonzalez said.

“With the food truck, we always know we will utilize all efficiency,” Gonzalez said.

Four Friends Tea Room owner Sherrie Kirby said she has also faced the challenge of having to supplement overhead during slow times.

“It’s kind of like we have busy days and sometimes terribly slow days. I’m not sure what makes us have slow days, and some are terribly busy,” Kirby said.

To help his restaurant become more successful, Gonzalez said he has learned to operate with less staff and less ingredients. He uses Mexican restaurants as an example of a wide menu with only a few ingredients that can still be successful.

“I think for us personally, we wanted to go out and conquer the world, so we had a million different food items. But some of the most successful places like Tex-Mex restaurants, for instance, can be very successful because they can take 10 ingredients and make 27 menu items with them,” Gonzalez said.

To cut back on food costs, the restaurant has streamlined menu items. Small-business owners of any kind need to find a way to supplement their costs, Gonzalez said.

“You have to understand when you're a small business, if you don't have a large amount of capital to inject back into your business, then during your down times, you have to have some way of supplementing your payroll, your regular cost, your fixed costs,” Gonzalez said.

Overhead can also include rent, which varies in different parts of Pearland and is relatively high in the west part of the city, according to data from the Pearland Economic Development Corp. Rent in the east side of Pearland ranges from $16 to $18 dollars per square foot. Meanwhile, rent on the west side is closer to $25.

Karafa said it is harder to stay afloat near Hwy. 288 due to the competition. Karafa originally opened near the railroad by Hwy. 35 before moving to her new location closer to Hwy. 288 a few years ago.

Just at the Hwy. 288 and Broadway Street intersection, there are three shopping centers and the Pearland Town Center, all offering several dining options.

“As the west side continues to grow, business come to the west side. This can be both a blessing and a curse,” said Danny Lee, a Pearland resident who runs the Pearland Foodies social media platform.

All or nothing for owners
Gonzalez said he knows if the restaurant cannot support itself, then he will have to close down, and he and his wife will have to go back to work. For other restaurant owners, this is not an option.

Kirby purchased Four Friends Tea Room, located at the Hwy. 35 and Broadway Street intersection, in 2013 and has run it ever since. While the business has had hard times, particularly during Hurricane Harvey, Kirby said she has refused to close.

“I was in it for the long haul no matter what. I have kids going to college, and I had to make it work,” Kirby said.

While the business was not flooded by Hurricane Harvey, Four Friends experienced setbacks from the storm for a number of reasons, Kirby said, with one reason being that a co-owner’s home flooded.

“Business took a downturn because people didn’t have extra money for a tea room lunch maybe at that time,” Kirby said.

While Harvey was a year and a half ago, it is a big reason Tina Siebert has seen some local restaurateurs suffer in the past, she said. Siebert is a Pearland resident and the administrator of the Pearland Eats Facebook page.

From what Siebert has seen, the most important thing is for restaurant owners to listen to the critiques of the patrons, Siebert said.

“I think that [owners] just have to listen to the people in Pearland,” Siebert said. “I’ve heard some say ... we don’t go out to eat a lot but when we do, we want to make sure it is an enjoyable meal for the entire family.”

However, Pearlanders may not always seek this experience at a locally owned restaurant. Siebert said she has heard comments that people want some chain restaurants, including the Pappas restaurants.

“There are so many places that people want to come here that they have to drive to either Sugar Land or Baybrook [Mall] or into town to get,” Siebert said.

While Cafe Taraiz has thrived in Pearland for 32 years, competing with big chains is one of the hardest parts of being a locally owned business, Karafa said.

“You need money for advertising, and you cannot spend the amount of money that they can,” Karafa said.

Tough critics
Small businesses have to make up for what they lack in advertising with quality and customer service, Karafa said.

Even with good customer service, business owners will still not please everyone, Siebert said.

“I think that everyone has their opinion,” Siebert said. “Then there are going to be some that just don’t like the food, they’ve had an off time, and that happens to everybody.” Siebert said.

Karafa has realized that an off day is not an option, especially for a locally owned business, she said.

“Individual businesses have to have good food, good service; you have to be consistently good all the time. You can’t slack off for one second,” Karafa said.

Because of this, Karafa said she has a hands-on approach at her business.

“I make sure everything is like I want it to be. Some of them come in daily, and we have some people that come once a month or every day. We have some customers, if they come for lunch then they come for dinner,” Karafa said.

When restaurants have an off day, Lee tries to be understanding, which is not something restaurant patrons always do, especially on the internet, he said.

“If one of these restaurant owners goes in to one of those people’s job and started talking the same kind of smack about them to their boss, then there would be a totally different reaction,” Lee said. “They are materially impacting that person’s ability to succeed in his business, feed his family and not lose his investment in that business, which is probably his life savings.”

As a businessman himself, Lee will always sympathize with the restaurant owners, he said.

“I am an entrepreneur. I absolutely land automatically on the side of the restaurant owner. They are putting their life savings into this. They are trying to feed their family,” Lee said.

Because of this, Pearland Foodies is a positive comments-only platform, he said.

“It doesn’t mean false reviews. It just means the classic, ‘If you don’t have something nice to say, don’t say anything at all,’” Lee said.