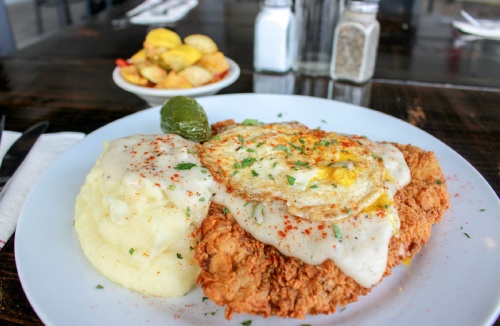 Before they opened Allendale’s Kitchen and Cocktails, Allen and Beth Kershner decided to bring down-home cooking to Pearland.

“We wanted country food because that is what people eat,” Allen said. “We didn’t have a place that was just good country cooking.”

“We just let Pearland tell us what they wanted to eat,” Allen said.

Because of the made-to-order menu, customers can request dishes to fit dietary needs, such as gluten-free or the ketogenic diet. Some items have been added because of customer requests, such as chicken pot pie and meatloaf.

Favorite dishes from the restaurant include the chicken-fried steak and the bacon jalapeno deviled eggs and fried green tomatoes, Allen said.

The restaurant also has a mixologist to create recipes for drinks, such as the Pearland mule and the New Orleans milk punch, which include infused alcohols created by the restaurant.

“Everything is made from scratch in the kitchen and behind the bar also,” Beth said.

Prior to opening a brick-and-mortar, the couple ran a full-service food trailer, which serves businesses and restaurant partners in Pearland and the surrounding areas. While the family has been in the restaurant business for over 20 years, there are some differences between owning a restaurant and a trailer, Beth said.

The couple owns the business with their daughter Sumer and son-in-law Keith. One of the best parts of owning the business is getting to spend time with family, Beth said.

Allendale’s opened for brunch in October, and features cocktails and an omelet bar along with a few regular menu items. The business is also working on adding fall and winter-themed meals to the menu, including stews and chili.

“We want this place to be perfect. We want to be here 50 years from now,” Allen said.