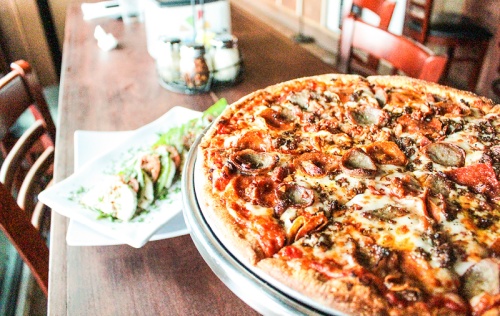 Diners can customize pizzas with up to six toppings or go with a classic option like the meat pizza.

Pizza is a perennial comfort food, and Pizza Lounge, 10555 Pearland Parkway, Ste. J, hopes to be the place locals go when they also want a comfortable atmosphere to match it.

“We are very cozy and family-friendly,” said Brandy Ribaud, who manages the eatery. “We have some regulars who keep coming, like ‘Cheers’ where everybody knows your name, you know?”

Brothers Amir and Fatolla Shahen opened Pizza Lounge in 2014 with carryout and delivery service and won over customers early by offering unlimited toppings at no extra charge, Fatolla Shahen said.

A year later, the business expanded its footprint, adding a bar with 16 rotating beers on tap and a selection of wine, and indoor and outdoor dining areas. It had also learned that limiting their pizzas to six toppings was a better way to go, he said.

“At each step, we innovate, we try new things and we learn. Just because one thing works doesn’t mean we’ll stick with it, and it’s OK to fail and learn from that,” Fatolla Shahen said.

The restaurant prides itself on fresh ingredients, trying new things and making pizza that meets each customer’s expectations, he said.

“We wanted to offer the best possible ingredients at a reasonable price,” he said. “Pizza is so personal. Everyone has a way they like it, and you don’t mess with that.”

Pizzas that exemplify their commitment to ingredients are the margarita, with fresh Roma tomatoes and basil, or the meat pizza, Ribaud said.

The menu also offers some items beyond a typical pizza joint, such as hummus, caprese salad and fried green beans. Aside from pizza, entrees also include pasta dishes, sandwiches and calzones. Diners who save room for dessert can choose from a selection of gelato or the pan-baked cookie a la mode, which is big enough for three people.

As the restaurant approaches its five-year anniversary in January, its owners are looking to expand with a second location in the Greater Houston area.