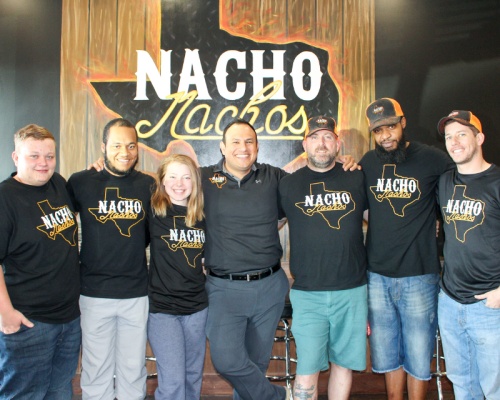 Owner Chris Gonzalez (center) stands with some of his team members at Nacho Nachos. Gonzalez said his brick-and-mortar location is one of several he hopes to have in the Greater Houston area.

“My parents are divorced, and my mom remarried when I was 3 years old. There’s a lot of culinary influences from my dad who is Hispanic and my mom who is Hispanic, to my stepdad who is a white guy–old-school country, loves to smoke meats,” Gonzalez said. “There were some really cool influences when it came to my upbringing.”

When Gonzalez was growing up, he said he loved to use smoked meats in traditional Hispanic dishes.

These influences were important when Gonzalez first created the Nacho Nachos concept, he said, which began as a food truck he ran part-time.

Gonzalez was also influenced by his faith when starting the business.

“Our foundation is Christianity,” Gonzalez said. “Even if we did this, or we sold tractor tires or we were a florist shop, we would have essentially the same mission statement. … In some meaning of the phrase, we would want to feed people.”

The Texas theme is present in more ways than just the flavors. Each menu item is also named after a Texas city. According to Gonzalez, he thought of all of the menu items, except one,  during a nine-hour flight to London.

“The only one I didn’t write down was the Houston. [I] came back to it later and said ‘You know what, Houston is diverse … what if it was your choice of three different meats you can put on top and we would just say ‘a dish as diverse as the city’?” Gonzalez said.

According to Gonzalez, Pearland- and Friendswood-themed nachos are still in the works.

Gonzalez opened the brick-and-mortar location at 1330 Broadway St., Ste. 104, Pearland in July. Gonzalez is hoping to open several Greater Houston locations, including one in West Pearland.

“To us, this is like our preseason game, and we’re getting warmed up, and we’re working out the kinks, and then we will be able to move to a place that will be more highly trafficked,” Gonzalez said.