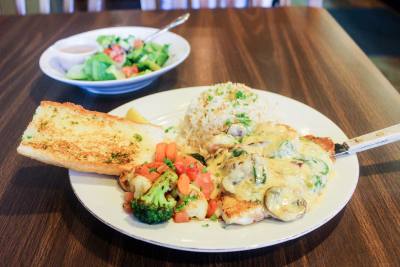 This popular entree is served in a chipotle sauce with fresh shrimp and mushrooms on a bed of rice and vegetables.

Taraiz Karafa has always loved cooking, but she never dreamed of opening a restaurant.

Her first catering job, which eventually led to her opening Cafe Taraiz in Pearland, was a friend’s wedding.

“When she came to my daughter’s baptism, she saw the food and she said, ‘I want this food at my wedding,’ and I said, ‘I don’t know where you get it,’ and she goes, ‘You,’” Karafa said. “I did her wedding in ’86, and I left there with a page full of names wanting me to [cater] their parties.”

Karafa launched her catering business in 1987 in Pearland. After catering numerous parties, friends asked her to open a restaurant where she could offer her Mediterranean and American dishes, Karafa said.

“We started off with a bang because there was nothing here in Pearland,” Karafa said, “When we started off 30 years ago, we were the only restaurant that wasn’t Mexican or barbecue.”

When Karafa opened her restaurant at 2401 S. Washington, Pearland, it was called Taraiz Gourmet. When she moved to her current location at 9415 Broadway St., Pearland, seven years ago, Karafa renamed the restaurant Cafe Taraiz.

“Thirty years ago, everyone who walked in, you knew who they were. You knew their name and who they were because the community was a small community,” Karafa said. “But now, we get people from Sugar Land, from all over the Houston area.”

“They’re still opening [restaurants],” Karafa said. Every time I lift a finger, a new one is coming in. But they don’t last very long. They open and close, they open and close. When new restaurants open, people go and try [them], and then they come back because they know this is steady and always the same.”