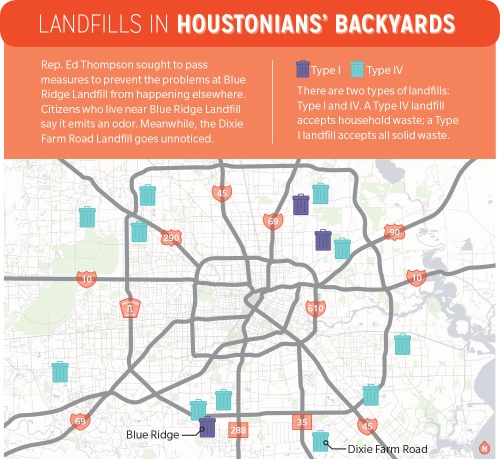 While some of Thompson’s measures were successful, others failed, leaving residents to try to come up with new ways to fight the landfill.

One plan includes a citizen-led nonprofit, Taxpayers for Environmental Quality, the goal of which is to allow citizens to collect data on Blue Ridge and hopefully achieve tighter landfill regulations in the state.

The goal of the citizen group is to help provide information to people, collect data and hire lawyers, all in the name of effecting legislation fixing the problems at Blue Ridge Landfill.

“We are not trying to shut them down, but we are trying to hold them accountable,” TFEQ president Lucian Hill said.”We understand the need for landfills but we are not going to sit idly be as a quality of life diminishes.”

The TFEQ’s work can include speaking publicly to elected officials as well as sending odor complaints to the Texas Commission on Environmental Quality when they occur, said Ed Mears, Shadow Creek Ranch resident and TFEQ secretary.

“If this isn’t fixed, our neighborhood is going to decline and we cannot allow that,” Mears said.

“We are doing our part, and we remain committed to operating the landfill safely, responsibly and as a good neighbor to this community,” landfill officials said in a statement.

The TFEQ’s goal is to raise enough money to help move legislation forward as well as fund machinery that will test air quality in the landfill. Having that data will validate citizens’ complaints in the area, Mears said.

The need for a citizen group to rally came after several failed lawsuits from both the citizens and the city of Pearland as well as failed bills, Mears said.

The city of Pearland filed a lawsuit to take action against Blue Ridge Landfill that was dismissed earlier this year. While it is the state’s job to regulate the landfills, local municipalities need to be given more power, said Trent Perez, Pearland City Council member and TCEQ liaison.

“The state needs to correct this idea that we can’t sue the landfill we are affected by because it is not in our jurisdiction,” Perez said.

Although the landfill is in Fort Bend County, the odors waft over to residents in Shadow Creek Ranch in Pearland. While the city sought to help these residents through a lawsuit, Perez said, they were unsuccessful due to an interpretation of state law.

Learning from the lawsuit, the city will lobby for more power in dealing with these issues that affect its citizens in the next session, Perez said.

“We were fortunate to have Ed Thompson take up this issue and have so much success. That facility is not in his jurisdiction either,” Perez said.

Two of Thompson’s bills were House Bills 1331 and 1435, both of which passed. HB 1331 required higher permitting fees for landfills, and HB 1435 required site visits be made in person.

HB 1331 raised the fee for permitting from $150 to $2,000, a fee that landfills have to pay before they can build the landfill. The fee had not been raised since the ‘90s, making the change overdue, Thompson said. While this will tighten regulations on other landfills in the state, it does not affect Blue Ridge Landfill.

Because of this, the TCEQ expects to see an increase in revenue to fund the permitting process. As it typically processes 12 applications  for new landfills every year, revenue would increase from $1,800 to $24,600, TCEQ officials said.

Because of HB 1435, the TCEQ is also required to do an on-site inspection of a municipal solid waste facility, or landfill.

“I just felt like that was the kind of thing that was happening over a desk,” Thompson said.

However, these were only two of Thompson’s 17 proposed bills on environmental quality, nine of which were related to landfills. While changes to the permitting process were made, the requirement that applications be completed before permits are given was not passed. A bill that addressed higher fees for permit violations was also not passed.

HB 4486, for example, was left sitting in the Environmental Regulation Committee. The bill addressed several different types of regulations, including those passed in HBs 1331 and 1435. The bill addressed issues such as the TCEQ giving permits with only partial applications, as well as giving the TCEQ more power over landfills that are violating their permits.

“We didn’t get as much done as I would have liked to get done in regards to the landfill issue. We were up against some folks that were pushing back on those,” Thompson said.

While permitting fees were raised, few strides were made in raising fees when an entity violates a contract.

“I would like the TCEQ to have more teeth when they find that these landfills are not operating as they should,” Perez said.

Perez suggests both higher fees as well as an opportunity to suspend a permit, which is not something the TCEQ can do, which are both ideas Mears supports.

“Just the fear of losing the permit would correct lawless behavior,” Mears said at the hearing for HB 4486.

Mears said at the hearing that more power for the TCEQ to punish landfill companies that are out of line is not something the state has granted so far.

To Mears, the idea the Blue Ridge Landfill should be more closely regulated is not up for dispute, he said.

“There isn’t some questions that there’s a stink. [The TCEQ] quantified the concentrations of hydrogen sulfite in our neighborhood. They’ve documented that our inspectors have been made sick in our neighborhood,” Mears said at the hearing. “The facts are there. That’s not the problem.”

However, officials at the TCEQ said they are taking action with Blue Ridge Landfill in a written statement.

As the pending enforcement action continues for Blue Ridge Landfill, the odor continues in Shadow Creek Ranch, which is unacceptable, Mears and Perez said.

“No matter who your neighbor is, they should not make your life miserable,” Perez said.

While HB 4486 and others failed, there is a possibility more strides can be made with legislation next session, Mears and Thompson said.

“Sometimes it takes more than one session to get these things done,” Thompson said.
SHARE THIS STORY