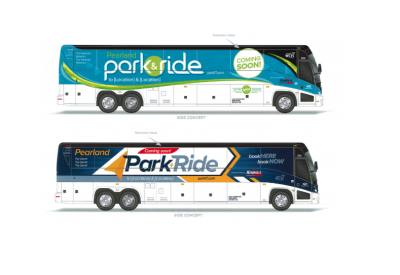 Mockups of possible park and ride buses show what Pearland's service could look like.

A park-and-ride commuter bus program that was initially targeted to launch in the fall of 2018 has been put on hold as officials wait to see if they will receive $1.5 million in grants to help offset the cost of operations in the first two years.

“It is anticipated we will receive notification one way or another regarding our grant application in late February. Once the grant notification is made, we will have a better estimate as to when the program will begin,” Deputy City Manager Jon Branson said.

The city and Kerrville Bus Company, which agreed to run the pilot program at no out-of-pocket cost to the city, applied for Congestion Mitigation Air Quality grant funding through the Houston Galveston Area Council in October.

While $1.5 million is the cap for a pilot program grant, there may be additional grant funds available after the launch, Branson said.

The pilot program will cost around $2.1 million in the first year to get up and running, according to projections included with the application. The program becomes sustainable in Year 3, once ridership exceeds 1,100 per day and revenues reach $3.3 million per year, according to the application.

Once it launches, the service would provide routes to the Texas Medical Center and downtown Houston from the Sports Complex at Shadow Creek Ranch. As the service grows in ridership, the city will need to create additional parking at the site, which the city would fund, Branson said.
SHARE THIS STORY

The first phase of the town center is scheduled to come online in late summer 2022, according to a Weitzman press release.

The Pearland restaurant is the third location for the business.