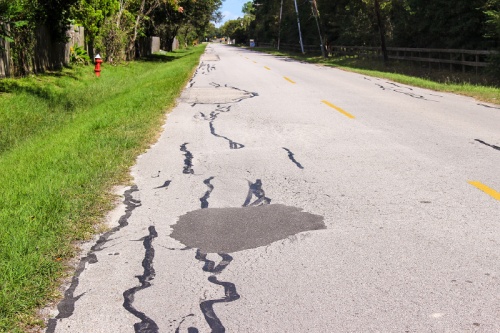 The city of Friendswood received a grade on every road segment from Infrastructure Management Services over the summer.

This month, Friendswood has begun patching and resurfacing roads across the city under a five-year plan guided by a recent Infrastructure Management Services study and funded in part by a 2016 tax initiative.

Meanwhile, in Pearland, the city has had to cut its road and maintenance budget—money to keep roads in good shape rather than build new ones—in order to help fund staff raises and increase staff at the police department.

“If you want to add police or firefighters or give employees raises, then the money has to come from somewhere,” Pearland City Council Member Trent Perez said.

Pearland also completed an IMS study back in 2014. According to the study, the city needed $4.6 million every year to restore and maintain its roads and sidewalks, but Pearland has struggled to allocate the full amount. The city budgeted $1.73 million in 2017-18, but this fiscal year the budget was slashed to about $714,000.

Confronted with aging roads and growing populations, cities are left with the question of which roads should be replaced through major projects funded by bonds, grants or other partnerships and which roads just need routine fixes, such as patches and overlays.

“It’s a hard balance. In the end, we would love to be able to buy everything we want. But if you’re not making enough money, then how do you do that? That’s where we are,” Perez said.

Friendswood has budgeted $1.8 million a year for road and sidewalk maintenance, which is largely funded by a special sales tax approved by voters in 2016, city engineer Patrick Donart said.

The study was completed to take the emotion out of road repair priorities, Donart said.

Ron Flatt, who has lived on Falling Leaf for over 30 years, said the street needs repairs and hopes the repairs lead to more construction.

“I hope they widen it a bit,” Flatt said. “About the only thing they have done over the years is raise the ditches.”

The city can use the road rating to target the ones in need of the most help, Friendswood City Council Member Carl Gustafson said.

“It will provide us with a very analytical approach to road maintenance moving forward,” Gustafson said in an email.

In the IMS study, neighborhood, thoroughfare and collector roads in the city are divided into segments and given numerical ratings as well as a marker, which can range from “very poor” to “excellent.” Segments that rank as poor are prioritized for repairs, but those considered very poor are saved to be entirely rebuilt.

Roads maintained by the Texas Department of Transportation, including Friendswood Drive, were not included in the assessment.

Friendswood will follow the plan IMS has outlined with the exception of grouping yearly projects by either asphalt or concrete to make construction cost-effective.

“What we have decided to do from a pricing standpoint, I believe you are able to get better bids if you keep it within one genre,” Donart said.

The city awarded the first maintenance contract in October. With the money coming in sooner than expected, Friendswood may be able to complete the road maintenance ahead of schedule.

“I’m hoping to get all five years done in four, but it may not work out quite to that,” Donart said. “It really depends on how much sales tax we have.”

The city wants to make significant headway with repairs prior to May 2020, when the sales tax will be on the ballot for renewal, Donart said.

“We do have that sales tax money, and we want to use it as best as we can,” Donart said. “We want to show results for the money we have actually been spending.”

After Pearland cut the maintenance budget, city staff has to go back to the drawing board and decide what projects it can tackle, said Robert Upton, director of engineering and capital projects.

“We will be utilizing our pavement condition index program to maximize those funds,” Upton said.

That index, or PCI, is a grade assigned to streets by IMS’ road condition study. Based on the funding, the city can use the ratings to prioritize certain streets, Upton said.

So far, Pearland’s 2014 road study has been primarily used to determine priorities for the major construction projects the city includes in its yearly capital improvement plan, Upton said, rather than routine repairs.

“We try not to do roadway maintenance with bonds. We want to try to solve long-standing problems,” Perez said.

While the city of Pearland has only $454,000 budgeted in 2019 for road repairs, it  is expecting to spend over $175 million on new construction, which can include widening, extending or reconstructing roads, in the next five years.

There are several streets in need of repair, particularly in East Pearland, Perez said.

“Because they are neighborhood streets, they aren’t traveled as much, and they never get prioritized,” Perez said. “We are trying to move mass volumes of traffic. It solves more problems when we build a Magnolia [Street] to run 30-40,000 cars per day than it is to do a San Antonio [Street] that might do 5,000 cars a day.”

With the current budget, there is only enough money to do some overlays on asphalt on smaller streets, Perez said.

Older neighborhood roads in need of repair can sometimes sit until the project can be grouped with others. This was the case with the Orange Street, Linwood Street and Old Alvin Road project the city completed in May, Perez said.

“People were very patient but active and open with their frustrations about that problem not being fixed,” Perez said. “Finally, the council got to the point where it was like, ‘We can’t let these people suffer.’ So we made it a priority, found the money to get it done, and then their roads are now brand new and fixed.”

When determining which roads need full replacement rather than everyday maintenance, officials look at traffic loads, amount of damage and the road material.

For example,  many roads across the region are made with asphalt rather than concrete. Instead of repairs, a better strategy may be to replace these over time, officials said. For a growing city such as Pearland, waiting for bonds and grants to rebuild roads may be a better approach.

“Based on our city’s thoroughfare plan and how we expand roads as we look at traffic analysis and traffic management planning, we may convert an asphalt road to a concrete road,” Upton said. “That is the natural progression of a city as we grow.”

Pearland’s goal should be to replace its asphalt streets with concrete, which has a longer life span, Perez said. With growth, converting an asphalt road to concrete becomes more feasible as bonds and grants can be used to fund critical mobility improvements. This took place with the Bailey Road project in 2017, Perez said.

“Asphalt is a failed experiment in the Houston area,” Perez said.

Friendswood may consider converting asphalt to concrete as a part of a bond project, but that discussion is years away, Donart said.

“I think once we get through our first few phases, then we will start to look at, ‘Hey, where does it make sense when all the streets around this one are concrete. Let’s transition this particular street to concrete,’” Donart said.
SHARE THIS STORY