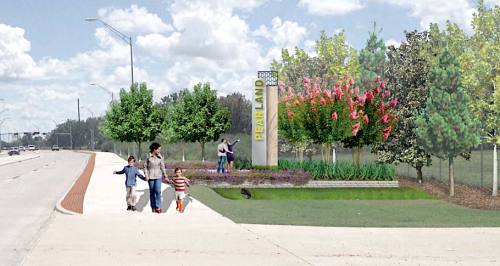 Pearland City Council approved a contract to redesign the public spaces around Hwy. 35 from Beltway 8 to Broadway Street on July 23.

The Pearland Economic Development Corporation will spend more than $6 million over the next year to update Hwy. 35 to continue an effort to create branded corridors under a plan approved by the City Council on Monday.

The improvements will span from Beltway 8 to Broadway Street. The plan includes an entryway at Beltway 8, two Pearland monument signs near Clear Creek, the same design as those along Pearland Parkway and Kirby Drive.

Medians and roadways will get additional canopy trees, major intersections will be redesigned to be more pedestrian friendly with landscape features. In the Old Town section, the plan also calls for extending the sidewalk by adding pavers or shrubbery as space allows.

All of the work is being done in the public right of way, so property owners will not have any land directly affected by the work, officials said.

"For the overall look and feel of the entire neighborhood, over time, this will help make improvements and help to encourage more quality development," said Matt Buchanan, president of the PEDC. "This is one step of many steps we'll take."

Landscape Art Inc., a League-City based firm, was awarded the construction contract on Monday. The same firm did the corridor improvements along Kirby Drive in Pearland.

According to a report presented to the council, construction could begin in two weeks and will take one year to complete. The original design for the project was created in 2016 as part of the PEDC's 20/20 plan to stimulate commercial development throughout the city. At the time of the design, the Hwy. 35 area was about 65 percent undeveloped.

The council approved one amendment to the contract to trim $200,000 in costs by asking for hydro-mulch instead of traditional sod for the grass landscaping portion of the project.