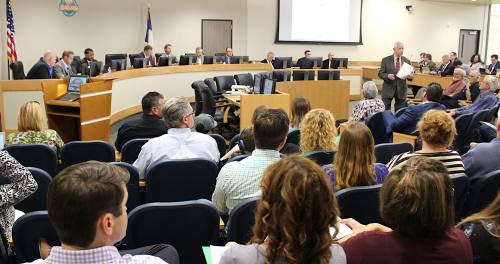 In a unanimous vote Monday, Pearland City Council decided to undo three annexations it completed in November when the city faced a deadline imposed by a new state law, but it also approved a resolution calling for the city to establish agreements with the de-annexed residents to pay for fire and emergency services.

If the areas don't seek out an emergency services district designation or some other agreement with Pearland, fire and emergency service would end Dec. 31, according to the resolution. Brazoria County would then be the primary response agency for those areas.

The three areas, designated A, C and L by the city, would have added almost 2,000 acres and 300 residents to the property tax rolls, but after months of pushback from citizens, the council revisited the decision.

Council Member Tony Carbone commented when the ordinance came up for a vote: "Have we notified the school districts we're doing this?" as a nod to one of the missteps the city was accused of while pursuing the annexations.

No property tax had been collected, the city said, so there is nothing to refund residents in the affected areas.

One of the goals of the annexations was to recoup the cost of providing fire and emergency services to those areas, Council Member Trent Perez said. By de-annexing the areas, providing service adds a burden to the city, he said. According to city estimates, the fire department spends $1.7 million a year serving the extraterritorial jurisdiction.

"I can no longer feel comfortable that Pearland taxpayers are subsidizing ya’ll," Perez said. "If you want them back, join together and find a way to pay."

Perez suggested that without an agreement in place, 911 response times may take a little longer and that Pearland ambulances may not be the responding agency to the de-annexed areas, but Carbone said that council's action is about finding a fair solution, not punishing residents.