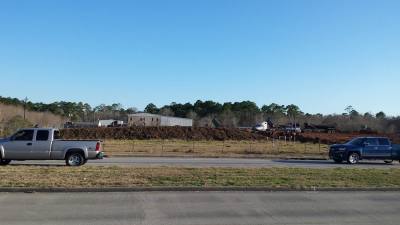 After reviewing its South Belt excavation project, the Harris County Flood Control District will remove all of the soil dumped onto a site in Friendswood in order to place it in a safer area, the district said Thursday.

“The Harris County Flood Control District contractor is going to remove the material that was placed on the current disposal site and transport it to another permitted disposal site outside the limits of the floodplain,” said Matt Zeve, P.E., director of operations at the Harris County Flood Control District. “A mistake was made and we are going to correct it.”

The project, which is creating a new stormwater retention basin to reduce the potential for flooding in the Clear Creek and Mud Gully/Beamer Ditch watersheds, had been suspended Tuesday in response to residents' concerns about the movement of dirt onto a section of land in Friendswood. The district had inspectors at the site, located at 2811 Dixie Farm Road near Blackhawk Road, to check for compliance with the Stormwater Pollution Prevention plan, which is intended to prevent sediment from washing into storm sewers or bayous during construction.

On social media, residents expressed concern that the soil was being removed from the old Southbend subdivision area, which has a history of contamination from the Brio superfund site, but the district said that tests have shown it is safe.

"Soil from the stormwater detention basin site has been tested for contamination on multiple occasions, including before the Flood Control District acquired the property for stormwater detention, and has been found to be safe," the district said. "This excavated material is not from the Brio superfund site."

The district's statement Thursday reiterated that the decision to move the material is based on the potential flood risk and is not an environmental quality issue.

The work will resume once the contractor can obtain approval for another disposal site and can get crews to the Dixie Farm Road location, the district said.