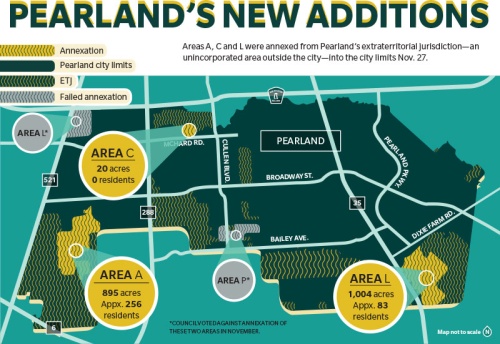 With the passage of Senate Bill 6, or the annexation bill, cities in large counties are now required to get voter approval for annexation. The bill went into effect Dec. 1.

As Pearland stretches into both Fort Bend and Harris counties, which are both larger than 500,000 residents, the city is directly affected by SB 6.

“The city of Pearland, as well as other cities have prioritized annexation,” Council Member Trent Perez said. “We have been honest with people that the passing of Senate Bill 6 is a motivation.”

Each of the areas up for annexation are part of Pearland’s extraterritorial jurisdiction, an unincorporated area the city has regulatory power over. Pearland, like many larger cities, has an ETJ with the intention of eventually incorporating into the city, City Manager Clay Pearson said.

“The city of Pearland, like many fast growth cities, has had an ETJ, a future growth area,” Pearson said. “Sometimes [ETJ] comes in … a developer brings those into the city, [other] times there are areas that have strategic partnership agreements. Sometimes, its major road projects like Bailey Road [that lead to annexation].”

SB 6 divides counties and municipalities, including cities, into two groups. Pearland is a Tier 2 municipality, which means it is located in one or more counties with more than 500,000 people.

Under SB 6, residents in an ETJ that Tier 2 municipalities want to annex are allowed to vote on the annexation. Voter approval in areas being annexed is now required as of Dec. 1.
“To me, it was just a bad timing on it. It wasn’t our fault; it was the Legislature’s fault,” Council Member Woody Owens said.

Ordinance 1548 proposed annexation of Area A, which consists of approximately 895 acres within Brazoria County, located north of MUD 22, east of CR 564, south of CR 92 and west of CR 48, according to the city of Pearland.

Ordinance 1551 proposed annexation of Area L, which contains 1,004 acres northeast of Hwy. 35, between Dixie Farm Road and CR 129, according to the city. Area L included the Pearland Regional Airport.

Originally, the council was also presented with ordinances 1550 and 1552, which called for the annexation of areas I and P, respectively.

Area I consisted of 338 acres located near Southbelt Industrial Drive, west of Almeda School Road, south of Beltway 8 and east of FM 521, according to the city of Pearland.

Area P consisted of 281 acres located south of Magnolia Road, north of Bailey Road, west of Manvel Road and east of Webber Drive and Deerbrook Court, according to the city of Pearland.

Council Member Keith Ordeneaux has said he would be fine with ETJ citizens voting on the annexation, if the citizens in the city could vote as well.

“As I have stated many times in public meetings, I would have been OK with the state allowing everyone affected by an annexation to have a voice; but this would have to include the existing city taxpayer that are currently in the city as their taxes fund current and future service to the ETJ, which as of today has paid no property taxes towards these services or investments,” Ordeneaux said in a written statement.

Because the ETJ is not incorporated into the area, its residents do not pay property taxes to the city. However, the city does provide some services to the ETJ through service agreements.

After SB 6 was passed in the summer, the annexation of areas A and C were going to be discussed in fiscal year 2017. Areas I, L and P were added due their potential for growth, Pearson said.

“All of these areas are already next to very developed and heavily invested roads and utilities and next to our existing 120,000 residents,” Pearson said.

Since the bill was passed, the City Council moved all areas up to be considered in November.
Area P was voted down, 4-3, at the Nov. 13 meeting, taking it off the agenda indefinitely, Pearson said. Area I was passed over without any action at the Nov. 27 meeting.

With annexation, these Areas A, C and L will receive more city services, such as water and sewer. However, it may be 10-12 years before water and sewer treatments are installed, Owens said.

With annexation, residents will also pay taxes to the cities, and will be required to get building permits from the city.

Council members are divided on the topic of annexation.

Perez said he supports the annexation of the areas because of the need for growth.

“I firmly believe that annexation is a necessary part of a city’s growth,” Perez said.

Council Member J. David Little has voted in favor of annexation for the areas he believes are primarily industrial, he said.

Like Little, Owens voted for the annexation of areas that did not affect ETJ residents.

“I only voted in the one area to approve that, and that’s C. That’s the 20 acres off of Cullen and nobody lives there. Nobody is hurt,” Owens said.

Area L, which contained 1,004 acres northeast of Hwy. 35, between Dixie Farm Road and CR 129, became smaller during the Nov. 13 meeting when Perez proposed an amendment.

“The priority for me is the airport area,” Perez said.

With the amendment, Little voted for the annexation of Area L on Nov. 13. Little was absent from the Nov. 27 meeting.

“Once [Council Member] Perez removed the residential areas, I was for that,” Little said. “I was prepared to vote against it otherwise.”

Like Little, Owens is in favor of annexation that does not affect residents.

“The time period is wrong right now. Everything that happened with [Hurricane] Harvey, it’s a difficult pill to swallow right now,” Owens said. “It’s a big problem. Personally, I hate to see people go through this. They moved out for a reason, and I respect that.”

“We are excited for what the future opportunities will be and what the infrastructure plans are,” Alexander said. “Those are all key factors to the airport’s vitality. We don’t have a lot of information from the city [on plans for infrastructure improvements], but we are very much looking forward to what those plans are, which will only in turn assist and facilitate the growth of the airport.”