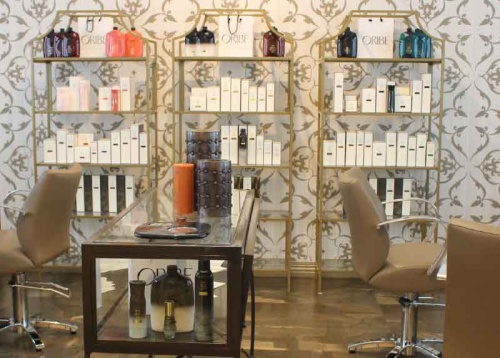 Bergamos Spa Retreat has a salon offering blowouts, complete with a wine bar.

Owner Marylyn Reed hopes Bergamos Spa Retreat, nestled in Friendswood near Mary’s Creek, can one day be a “destination day spa” for people, complete with massages, facials, wine and food, and other treatments, Reed said.

Once the business opens a cafe in March, Reed hopes people choose to spend the day there, she said.

“We’re so unique because most places do one thing, whereas we have that umbrella that I call a ‘salon spa,’” she said.

The spa offers standard treatments, including facials, massages, spray tans and manicures, but also boasts special services, such as a salt room, a pool, a yoga studio and a blow dry bar complete with wine.

Reed has always had an interest in spas, as she used to visit them with her family when she was younger. It was then she learned what she liked and did not like, she said.

“I just thought, ‘I really like these services,’ and I thought I could do it better,” Reed said.

Reed opened the business in 2001 and moved to her new space in 2017. However, the business received almost 2 feet of water during Hurricane Harvey, which prolonged reopening the business after the relocation.

While Hurricane Harvey was a challenge for Bergamos, the storm helped Reed and her team realize they felt like family, she said.

“Harvey sealed the deal for everyone, but it ... probably felt like that for a pretty long time,” Reed said.

Since reopening Bergamos last July, the business has continued to grow. The spa prides itself on top-of-the-line care, Reed said.

“We don’t want to be doing fads,” Reed said. “What we want to do is [provide] quality service.”

Reed also hopes to get people to slow down and relax while they are at the spa. In the salt room, which clears the respiratory system, customers cannot have their phones with them, which forces them to take a mental break while they are at Bergamos, Reed said.

“It’s really a trained habit. We teach a lot of that here,” Reed said. “You practice what you preach, right?”