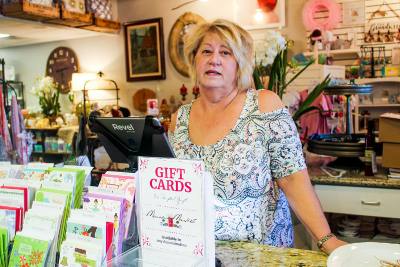 Sharon Brown opened Marrone Market in Friendswood two years ago after working with antiques in the Memorial area of Houston.

Brown’s store features an eclectic collection of items from all of over the world, as well as gift pieces, such as cosmetics, stationery and kitchen ware.

Brown began her business selling antiques in another storefront in the Memorial area, which is where she learned how to spot an authentic antique from a fake.

“I learned the trade in the first two years,” Brown said.

“I just loved the character,” Brown said. “It’s just so much about life.”

While she was in Italy, she also signed a contract with Gori 1919, an Italian soap company that sells soap made from olive oil. The Gori soap is one of the store’s most popular items, Brown said.

Many of Brown’s pieces are a bit pricey, due the age, authenticity and rarity of some of the antiques.

“Whatever I buy, I will only buy high quality,” Brown said.

While some larger pieces may take a while to sell, a lot of the smaller antiques sell quickly, she said. Although Brown can restock some pieces, a few of the antiques are rarer.

However, Brown sells pieces for a variety of price ranges. Some of her most popular pieces are time capsule books, which allow family members to write down memories and give them to loved ones for special occasions.

“Antique stores can carry just about anything they want,” she said.

Brown began the process of selling antiques once after experiencing the loss of her nephew, and her mother’s diagnosis with Alzheimer’s disease.

“I needed to find something to do that was happy,” Brown said.

One of the hardest parts of running the business is getting the word out about the business, she said.

“I am still in the process of people finding me,” Brown said.
SHARE THIS STORY

Qatar Charity along with the University of Houston-Clear Lake Diplomacy Institute will host a food distribution event.