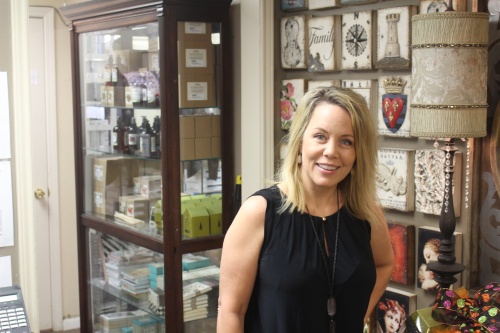 Stacy Mendenhall Parsons bought her Friendswood floral shop in 2012 and hopes to continue its 50-year legacy in Friendswood.

Lary's Florist & Designs owner Stacy Mendenhall Parsons said the most rewarding part of her job is when all of the hard work can be justified with a comment from a satisfied customer.

“I love being able to bring a girl’s dream wedding to life,” she said. “When a bride and mother of the bride come up to me in tears and say, ‘It’s everything I imagined and then some,’ that is worth all the stress.”

Mendenhall Parsons bought the floral shop in 2012. Since then, she has worked to carry on the 50-year legacy of a business rooted in the Friendswood community.

Prior to taking ownership of Lary’s, Mendenhall Parsons had a conversation with then-owner Lynn McLean. She told McLean when she was ready to sell the flower and event planning business in Friendswood, she would be ready to buy.

Mendenhall Parsons earned a degree in interior design, but worked as an event planner and was also the CEO of a Kentucky-based liquor company. She said Lary’s was the perfect way to leave her fast-paced lifestyle behind.

“It was a great experience, but I realized it was not the world that I want,” she said. “I’m your little suburban, small-community mom, and that’s what I want to be. I came back [to Friendswood], and I took two years off. That’s when I told Lynn that Lary’s was the perfect fit for me.”

McLean and her mother, Georgia Lary, had developed a customer base in the Greater Houston area since opening in 1963. Mendenhall Parsons said those deep roots were an attractive quality when taking over the business.

Lary’s is not the typical floral and boutique shop. Mendenhall Parsons and her staff of 10 offer everything from wedding flowers to full-service wedding day planning, she said.

“Lynn introduced weddings, I think, in 1985,” Mendenhall Parsons said. “She started doing event planning and things like that. My degree is in interior design, and everyone always tells me I throw great parties. So it felt like
a great fit.”

The Friendswood floral establishment boasts big clients across the Greater Houston area. Lary's supplies all of the arrangements for the Four Seasons Hotel Houston. Mendenhall Parsons said McLean was the driving factor behind the shop's success.

“Lynn is probably the best floral designer in the industry,” she said. “She’s amazing. Her attention to detail is insane. It was a real honor to work with her when I did—to work beside her and learn from her.”