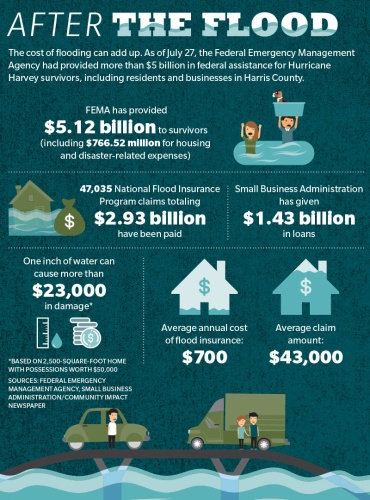 In the year since Hurricane Harvey caused Cypress Creek to spill out of its banks and flow down Spring and Klein streets, members of the community have struggled to navigate their options for rebuilding.

While several county facilities and cultural venues on Cypresswood Drive have resumed operations after months of closure, others continue to complete work as the one-year anniversary of the Aug. 25-29 storm approaches.

Meanwhile, as federal assistance for hotel lodgings for those displaced by the storm ended July 1, homeless advocates work to keep up with the demand for services.

“If there was a waiting list for people who were homeless before, with the shortage of housing, that waiting list multiplied 10 times,” said Jennifer Herrera, director for disaster services at the nonprofit organization Northwest Assistance Ministries, which works with homeless and low-income populations.

Harris County Precinct 4 officials have estimated that 11,000 homes in the precinct were destroyed by flooding during Hurricane Harvey. Homeowners in the county have received more than
$766 million for housing and disaster-related assistance from the Federal Emergency Management Agency, but many still seek a permanent solution, Herrera said.

Federal funding for hotel stays ended July 1 after several extensions, according to FEMA, leaving residents who had not yet lined up housing to pay out of their own pockets or find other solutions.

Organizations like NAM help to fill those gaps and assess other needs of displaced families, Herrera said. As of July, NAM had helped about 12,700 individuals through its assistance programs, she said. NAM received $5.7 million from the Greater Houston Community Foundation’s hurricane relief fund to assist with its work. GHCF, a nonprofit organization, administers grants for philanthropic causes.

Buyouts may be an option for some of those who own flooded homes in the flood plain. Harris County Flood Control District is considering several areas along Cypress Creek for buyouts as part of Harris County’s $2.5 billion bond referendum, which will go before voters Aug. 25.

In the Champion Forest Section XI development, some houses only recently saw trucks arrive to clear out debris, Maduzia said.

Although those areas are not slated as potential buyout locations in the bond proposal, Roloff said many homeowners have put properties up for sale.

The community facilities known collectively as the Cypress Creek Cultural District on Cypresswood Drive flooded during the August storm, but organizations were able to continue offering some services during the renovation process.

The library performed about $1 million in repairs over an eight-month period, Branch Manager Clara Maynard said. The first floor of the library sustained the most damage, but several changes implemented during the renovations, like elevating air conditioning units, could help stave off future damage on the same level, she said.

The library is now restocking its shelves and reintroducing kids’ programs, Maynard said.

“We’re going to be buying more books and continuing to provide programs during the summer for the kids,” she said.

Nanci Decker, director of Cypress Creek Foundation for the Arts and Community Enrichment, which used The Centrum for its performances, said the organization has moved its offices to Louetta Road and has relied on partnerships to continue presenting music and theatrical performances since last fall.

“[Concertgoers] were grateful when they started coming to the concerts again; it gave us a new lease and inspiration to continue to grow and do more things,” Decker said.

One block from the heart of the cultural district, the county annex building at 6831 Cypresswood Drive flooded with 4 feet of water during Harvey. The building began to return to business as usual this summer, when the court offices for Judge Lincoln Goodwin—justice of the peace, Precinct 4, Place 1—opened July 9 for limited business. Hearings resumed later in the month.

As of late July, Harris County Engineering Department had spent $5.32 million on repairs at the Cypresswood annex, excluding building contents, said Shain Carrizal, director of administration and finance with the Harris County Budget Department. The costs were covered by the county, but reimbursement is expected through FEMA and through flood insurance, Carrizal said.

The building also houses the Precinct 4 constable’s office and offices for District 1 of the sheriff’s office. Precinct 4 Constable Mark Herman said his offices are almost ready to open to the public, pending inspection and some work on an entrance. The offices have seen a considerable investment in new infrastructure, he said.

“Where our old center just had a desk and radio, we have state-of-the-art equipment,” Herman said.

The justice of the peace offices have expanded into space previously occupied by the county tax assessor and collector’s annex office. Those offices will not return to the Cypresswood Drive location, and a permanent location for the office will be announced in the upcoming months, said Tracy Baskin, director of communications for the tax office.

Goodwin said the courthouse facilities could eventually move to another location, such as the county-owned land near Hwy. 249 and the Grand Parkway in Tomball slated for Precinct 4 administrative offices. There are no plans for the courthouse to move in the near future, he said.

“We’ve unpacked our boxes here and plan on being here for a while,” Goodwin said.

Businesses and buildings along Cypresswood Drive were among the most heavily hit by flooding, receiving 4 or 5 feet of water damage in some cases.

Jake Tortorice, owner of Rao’s Bakery on Cypresswood Drive, said his store reopened for Thanksgiving after remodeling, and it is slowly rebuilding its clientele, much of which was also affected by flooding.

“Our sales are coming back. They are probably not to what they were, but a lot of homes are probably still empty or there are people still in distress,” Tortorice said.

Other flood-damaged businesses along the creek, such as Northgate Country Club, lost business in the weeks after repairing damage because so many members were too busy with their own flooded properties, owner Tim McIntyre said.

Elsewhere in the community, St. Ignatius of Loyola’s church buildings have needed $4.2 million in repairs as well as $1 million in replacement furnishings and equipment, Maduzia said.

The costs have been covered through insurance, through funds from the Archdiocese of Houston-Galveston and donations. The church received an unexpected $1 million in donations after an online video went viral in the weeks after the flood showing the pastor wading through water up to his hips and reacting to the devastation, Maduzia said.

“It went all around the world … and because of that people just started to send us money,” he said.

The church itself reopened in December, and many of the buildings were in service again in May, with attendance gradually recovering. However, Maduzia said last year’s rain has left him a little nervous about upcoming hurricane seasons.

“You can feel tension when you see several days of heavy rains … you can feel the tensions start rising,” he said.

Editor's note: In the graphic depicting projected facility opening dates, the date for the expecting reopening of The Centrum is listed as 2020. Norma Lowrey, executive director of Cypress Creek Christian Community Center, which owns The Centrum, has clarified that an expected opening date cannot yet be established.