5 things you may not know about Texas Central's bullet train 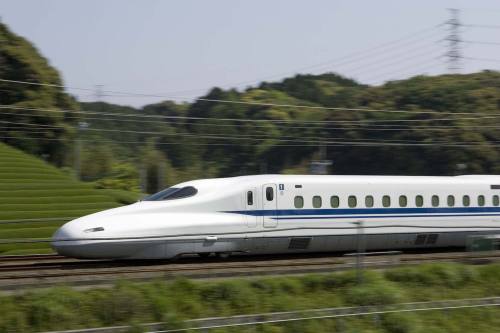 According to Texas Central, construction on the high speed rail will begin in 2018. When finished, passengers will be able to travel from Houston to Dallas in 90 minutes.

A dozen Greater Houston-area residents met at the Houston Amtrak station Saturday, Oct. 29, in support of improving and expanding passenger rail services throughout the nation. During its first Houston meeting, the group—members of the National Association of Railroad Passengers—focused on supporting Texas Central’s high speed rail, a project that will provide passengers a 90-minute trip from Houston to Dallas when completed.

David Hagy, a representative with Texas Central who spoke to the NARP members, said the electric bullet train is a necessary addition to the Houston-to-Dallas commute. However, residents in Montgomery, Grimes and other counties near or along the proposed route have expressed concerns about the high speed rail, including Texas Central’s use of eminent domain, the project’s cost and the impact on rural landowners.

Here are five things to know about the high speed rail:

1. The high speed rail will be the first of its kind in the U.S. with Central Japan Railway as its technology provider.

Hagy said the Japan-based company, which has used high speed rail for 50 years, will provide the technology for the train and help with its upkeep.

“There is no high speed rail in the U.S. at this point,” he said.

Security for the high speed rail will be on par with security at other train systems and be less intrusive than airport security. The train cars will feature wide seats, aisles with wheelchair access and Wi-Fi, Hagy said.

In response to a question from a NARP member, Hagy said the cost of the high speed rail will not be passed onto taxpayers. Rather, he said the company will pay nearly $2.5 billion in taxes to the state as well as the counties the railway passes through. Data on exact tax projections by school district has not yet been released, Hagy said.

“Unlike a road, we’re a taxpayer,” Hagy said. “Every county and school district and each town we go through, we’ll be taxed. I think it’s basically going to be on our track miles.”

Hagy said while Japan’s version of the high speed rail has never had a collision or loss of life in its 50 years of usage, Texas Central plans to take precautions by equipping rural communities along the high speed rail route with emergency services.

3. According to Texas Central, the company chose the Houston-to-Dallas route because of the projected growth in both cities.

Hagy said 50,000 super commuters currently travel at least three times each week between Dallas and Houston. The population of both cities is expected to nearly double in the next 25-30 years, increasing the number of super commuters, he said. As a result, Hagy said the Texas Department of Transportation estimates the commute will grow from four hours to 6.5 hours.

4. Once an environmental impact study is completed in January, Hagy said Texas Central will hear from the public regarding the final proposed route from Houston to Dallas.

If the high speed rail proves to be popular, Hagy said Texas Central will not need to acquire more property to widen its route as a roadway would. Trains could be run more frequently along the same tracks to handle an influx of passengers, he said.

5. Construction on the railway is expected to begin in 2018 with full service beginning in 2023.

According to Texas Central, construction will not begin until all funds have been received for the construction phase of the rail project. The four-year construction is expected to generate 10,000 jobs each year and up to 1,000 full-time jobs once the railway is operational.

“We won’t start until we have all the money,” Hagy said.

Hagy said the first fully operational train is expected to run from Houston to Dallas in 2023.

“We see national high speed rail as a series of linkages, not just one long route,” he said. “When we’re successful, we think people will join in [to link high speed rail throughout the nation].”