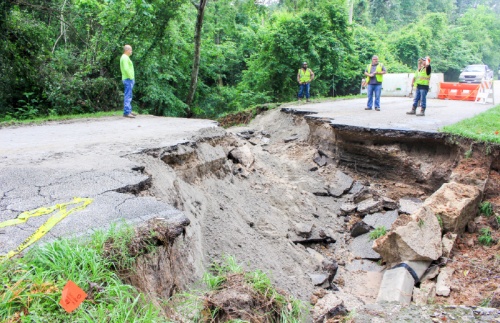 In 2017, an interlocal partnership between the city of Houston and Harris County Precinct 4 was proposed to upgrade Hamblen Road. The road collapsed on May 7 from severe floods.

Updated 2:15 p.m. May 30: The story has been updated from its original version to include information from Harris County Precinct 4 Commissioner's office on Hamblen Road.

In flood-prone Kingwood, two factors are key to boosting the local economy: improved mobility and drainage, said Harris County Precinct 4 Commissioner Jack Cagle at the Lake Houston Area Chamber of Commerce's State of the County luncheon on May 28. Cagle said the most cost-effective way to improve mobility and drainage is through local partnerships.

Cagle said the county is considering an interlocal partnership between the city of Houston and Harris County, in which the city loans the county a road and pays for 80% of the project, while the county would pay for the remainder of the project and build the road.

On average, it takes the county 27-36 months to complete a road construction project, while the city averages seven to nine years, Cagle said.

“We’re lean and mean and really know how to stretch a dollar,” he said. “It takes [the city] almost two years to get the planning phase done. So, we’re usually completing a project by the time they are starting to actually break ground.”

An interlocal partnership between the city of Houston and Harris County Precinct 4 was proposed in 2017 for the multi-phase Hamblen Road improvements from Loop 494 to Woodland Hills Drive. The project, which included widening the road from a two- to four-lane pavement, was scrapped due to lack of support.

However, the county is now pursuing similar improvements on Hamblen Road, which include building a bridge over the railroad near Edgewater Park.

However, Harris County is pursuing an engineering study to realign Hamblen Road between Loop 494 and Laurel Springs Lane, although this effort is not in conjunction with a city of Houston partnership, said Pamela Rocchi, director of Harris County Precinct 4's Capital Improvements Program. Rocchi said the project would realign Hamblen Road to connect to Sorters McClellan Road at the intersection of Loop 494.

"Proposed improvements include upgrading this section of Hamblen Road as a four-lane concrete pavement section with appropriate drainage accommodations including a bridge over the Union Pacific Railroad track," she said. "The four-lane pavement section will then transition to the existing two-lane asphalt road section at Laurel Springs Lane. These improvements will provide a mobility benefit and enhance the development footprint within Precinct 4’s Edgewater Park."

Cagle voiced his support of the project.

“It’s time for us to re-discuss putting this back on that project list,” Cagle said. “It was killed because there was a number of folks in Kingwood that were concerned that if we built a road that improved mobility and improved drainage, more people would move into Kingwood. I’m thinking now that there will be other voices that say mobility and drainage would probably be good things.”

The Hamblen Road project also has flood control features, which are in line with the county’s policy of improving drainage by 25% from its original state, Cagle said.

Correction: The post has been corrected to provide clarification on the Hamblen Road realignment project.