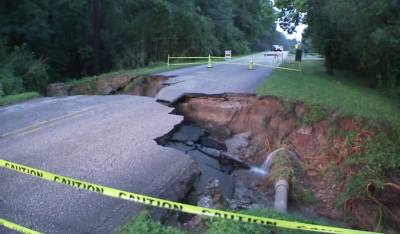 This photo was taken from an ABC 13 video of the moment Hamblen Road collapsed.

Severe rains throughout the Lake Houston area on Tuesday caused parts of Hamblen Road in Kingwood to collapse.

Alanna Reed, communications director with Houston Public Works, said the floodwaters washed out the portion of Hamblen Road between Redbud Lane and Bonnie Glen Lane. Reed said the Forest Cove neighborhood—where Hamblen Road is located—has frequent flooding issues due to its proximity to the West Fork of the San Jacinto River.

She said Houston Public Works Transportation and Drainage Operations initially inspected the road the night of May 7 and returned Wednesday, May 8, to complete the evaluation of the damage.

“They determined it will need to be totally reconstructed,” Reed said of Hamblen Road. “Houston Public Works is in the process of finding a contractor. They hope to have a contractor in place next week, but it’ll probably take at least two months to complete.”

The reconstruction of the road will be funded by the city of Houston; however, there is no estimated construction cost for the project at this time, she said. The road will continue to be blocked off until construction is complete.

With the Lake Houston area anticipating more heavy rainfall over the next few days, Reed said community members can call Houston 311, or 713-837-0311, if they see flooding or high-water areas.

“If they see things like this happening to their street, we need to know about them. and the best way to do that is by calling 311,” she said.